Nemechek takes Iowa victory with three-wide pass for the win 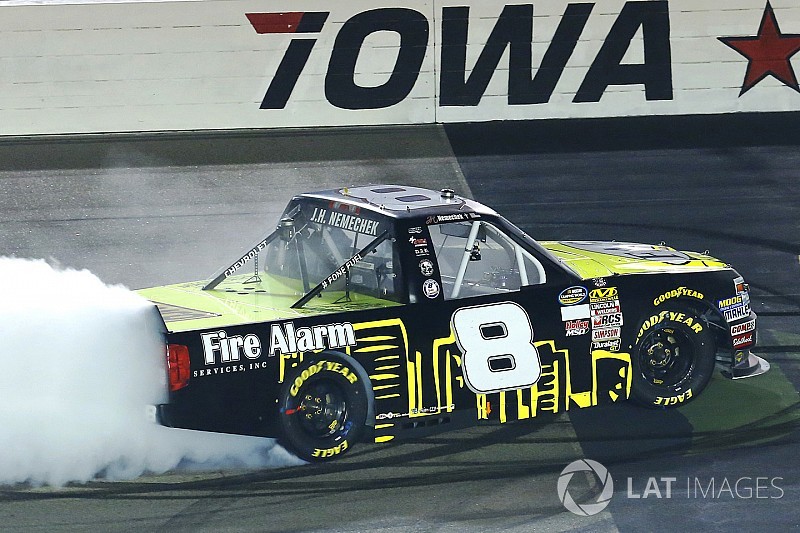 John Hunter Nemechek was not going to be denied.

The NEMCO Motorsports driver took the checkered flag for the second time in as many races and he did it spectacular fashion.

The race began with Noah Gragson leading the way from pole position before being overtaken by teammate Christopher Bell after 20 laps. He then held on to win the stage and collect crucial bonus points.

The running order at Lap 60 (end of Stage 1) was as follows: Bell, Gragson, Johnny Sauter, Chase Briscoe and Ben Rhodes.

"Yeah this thing is a dream machine right now," said Bell. "It's pretty fun to drive, we'll see if it stays that way when the sun goes down."

During the second stage of the race, Rhodes was forced to make an unscheduled pit stop for a vibration. Fortunately for him, a spin by Truck newcomer Mike Senica forced a yellow just past the halfway point and Rhodes was able to get back on the lead lap. During the caution period, Bell stayed out while most of the trucks behind him dove to pit road for fresh rubber.

On the ensuing restart, he could do little to hold off Sauter and Briscoe as they charged by the No. 4 Toyota Tundra. The stage would ultimately end under caution due to a multi-truck incident on the backstretch. Kaz Grala made contact with Cody Coughlin, sending his truck up into Rhodes and then back down the track, collecting Austin Wayne Self.

Behind Sauter at the end of Stage 2 was Briscoe, Bell, John Huner Nemechek, Bell and Gragson. Bell then pitted, falling back to 12th in the running order. "I got my work cut out for me," he told the Fox Sports 1 crew before expressing confidence in his truck to get the job done.

A red flag was displayed due to fluid on the track, lasting for 12 minutes and 26 seconds. When the race finally resumed, it was Sauter firmly in control over Briscoe.

With 33 laps to go, Ryan Truex brought his No. 16 truck to pit road with terminal engine issues, ending a strong run inside the top ten.

Sauter later said Briscoe "took him to school" when the Brad Keselowski Racing driver suddenly ran him down on the outside, quickly snatching the lead away and checking out. But it was short-lived. With 15 laps to go, Matt Crafton crashed heavily into the outside wall, igniting a shootout that changed everything.

Sauter stayed out, but Briscoe and everyone behind them dove to pit road. On the restart with seven laps remaining, it was Sauter leading Briscoe and Gragson, who had taken two tires. Nemechek was the top driver with four fresh Goodyears, restarting fourth.

Things got very hectic with trucks going three and four-wide as Briscoe attacked Sauter for the race lead. But those four tires paid off big time for Nemechek, who powered by both of them on the inside and never looked back. It was the rising star's fifth career victory and his second of the 2017 season.

"I cant say enough, thank you to all my guys they work as many hours as I do ... this is awesome," he said in Victory Lane.

Sauter held on to finish second and leaves Iowa with a 42 point advantage over Bell in the championship standings.

Five things to watch in the NASCAR Truck race at Iowa