NASCAR Next drivers top charts during Truck test at Daytona

Brand-new Chevrolet, Ford and Toyota trucks made their debuts on Monday at Daytona International Speedway.

Brand-new Chevrolet, Ford and Toyota trucks made their debuts on Monday at Daytona International Speedway.

It’s safe to say that they suit the NASCAR Next generation just fine.

NASCAR Next drivers Jeb Burton and Ben Kennedy drafted their way to the top of the speed charts during NASCAR Camping World Truck Series Preseason Thunder at Daytona testing. Burton churned a blistering lap of 191.144 mph, just slightly better than Kennedy’s 190.925. Both were driving next generation Chevrolet Silverados for Turner Scott Motorsports.

“I'm excited,” said Burton, who is preparing for his second full season in the NASCAR Camping World Truck Series. “I think it could be an advantage for us. I feel like our guys are working really hard with this new body style in the wind tunnel and testing a lot trying to make it better. I'm really excited to be back with these guys. My team is pumped up. We're ready to go.” 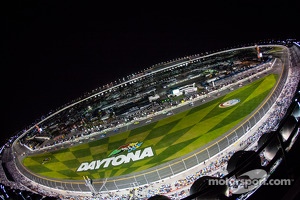 Twenty trucks recorded times during an extended test session Monday. Teams were granted an extra 45 minutes to test their trucks in the draft, as weather threatened to impact Tuesday’s track time. They made the most of that time, as a 10-truck draft finished off Monday’s action in high-speed style.

John Wes Townley (190.917 mph), Matt Crafton (190.634) and Darrell Wallace Jr. (190.577) rounded out the speed chart’s top five. Testing concluded Tuesday with a rain-shortened afternoon session and NASCAR officials were pleased with what they saw from the Chevrolet Silverados, Ford F-150s and Toyota Tundras.

“I think we've had a good test down here with all three series,” said Robin Pemberton, NASCAR vice president of competition and racing development. “The Sprint Cup Series session was a nice long day but it nonetheless was a good test; the Nationwide Series had obviously the best overall test in terms of timing and cooperation from the weather; and it looks like everybody with the Camping World Truck Series came down prepared, which is good to see.”

Series champion Matt Crafton is back to defend his championship and the Preseason Thunder test whetted his appetite for the action that awaits in 2014.

“It's just always a hope or a prayer that you could possibly get here and be able to race here, and now that I'm doing it, it's just a blessing to be able to do what I do and get paid to do what you love to do,” Crafton said. “I've got the best job in the world.”