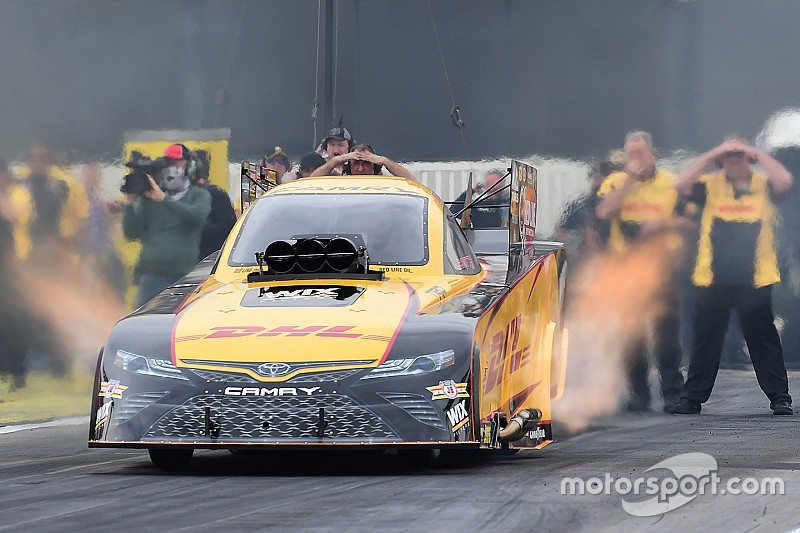 Top fuel and Funny Car drivers take to the track while NASCAR truck drivers sit in the hot seats during media event on Thursday.

“It’s definitely a different feeling in the turns (on a race oval track),” said Coughlin. “It would take me a while to get smooth making a lap in a car. It was fun and helps you appreciate what the NASCAR drivers go through in a race.”

For Gragson, who jumped in the Top Fuel dragster driven by Shawn Langdon, the feeling of 10,000 horsepower was impressive.

“This Toyota dragster was awesome and we were just idling and I’m in awe right now in the power of these machines,” Gragson said. “I have so much respect for these guys going full throttle going 300 mph down the dragstrip. That was awesome.”

Gragson and his three fellow truck drivers will return to Charlotte Motor Speedway for the North Carolina Education Lottery 200 on Friday, May 19th. After picking up his first intermediate track victory at Atlanta Motor Speedway in March, Christopher Bell hopes to add another a 1.5-mile track to the win column.

“It’s been a great year so far,” Bell said. “At Daytona we didn’t have the best race but we were able to still finish in the top-10 and moving on to Atlanta to win and then had a solid top-three finish at Martinsville and it’s be a great year so far in our JBL Toyota Tundra.”

Truex, who has dabbled in other series, is running the full schedule after competing part-time in the truck series since 2012, is happy to be able to drive full-time for Toyota team owner Shigeaki Hattori.

“Daytona we were really excited to debut a rebuilt team and were happy going into the race and got caught up in the big wreck on Lap 2,” Truex said. “This one-month break we’ve gotten between Martinsville and Kansas has given us a chance to build a new truck and get ready. We got a late start for the year and having this time off has been good for us to get ready for Kansas.”

Enfinger, the 2015 ARCA champion, is enjoying his first season driving a Toyota Tundra for ThorSport Racing. He earned his first top 10 (eighth) with the team at Atlanta in the second race of the season.

“It’s kind of hard to get in a groove when we haven’t raced that much yet,” said Enfinger. “Overall I’m happy with the progress we’ve made but I still don’t think we’ve hit our stride yet. I’m very happy to be in the Toyota camp this year getting to do fun events like this today and also spending time in the wind tunnel. It’s been great.”

The NASCAR Camping World Truck Series returns to action on Friday, May 12 for the Toyota Tundra 250 at Kansas Speedway. The 4 Wide Nationals for Todd, Coughlin and Langdon are this weekend at ZMax Dragway located near Charlotte, N.C.