Rhodes and Cindric collide in battle to advance into final four 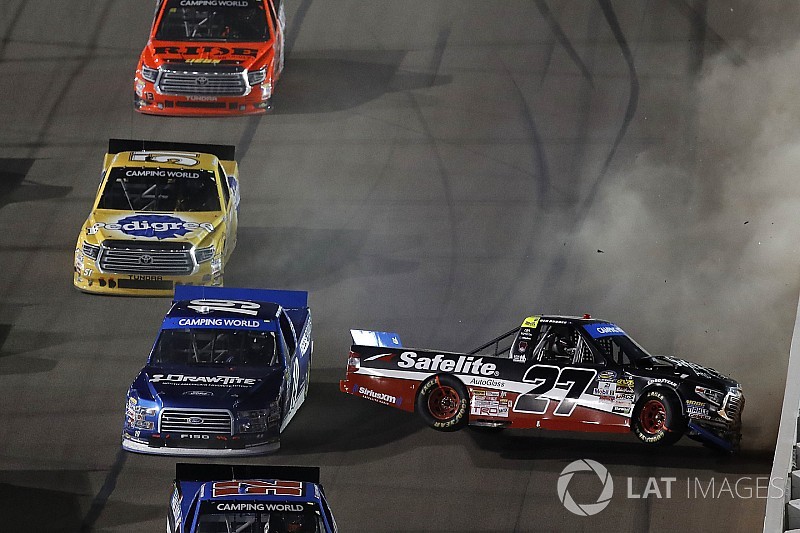 Ben Rhodes blocked his path to the Championship 4 in the final stage of the Lucas Oil 150 at Phoenix Raceway on Friday.

With 22 laps to go, Rhodes lined up ninth after the No. 27 ThorSport team pitted. As the field went into Turn 1, Austin Cindric went to the inside lane and Rhodes blocked him. Rhodes spun and took out his teammate Matt Crafton in the process.

The two drivers were in a tight battle for the final transfer position into the Championship 4 at Homestead-Miami Speedway. Due to Rhodes' DNF, Cindric went on to advance with a ninth-place finish.

NASCAR red-flagged the race at with 20 to go, which lasted 17 minutes and 7 seconds.

After emerging from the infield care center, Rhodes' teammate Crafton said he told Ben, "that No. 19 (Cindric) better not finish Homestead.

When asked about the incident, Rhodes stated that they weren't going to make Turn 1, even if he didn't throw the block.

"Looked like a desperation move to me," he told FS1.

"He didn't have the position on me at all, driving over his head I guess."

Championship 4 grid set for the NASCAR Truck Series at Phoenix