We definitely worked hard this year and accomplished this as a team.

The accomplishment marks the second NCWTS championship for RCR, who earned the inaugural NCWTS series championship in 1995 with Mike Skinner, also in a No. 3 Chevrolet. The 42-year-old racing organization, headed by Dillon’s grandfather Richard Childress, now has 14 motorsports championships overall, spread across the NASCAR Sprint Cup Series, NASCAR Nationwide Series, NCWTS and the ARCA Racing Series presented by Menards.

“It's so special when you're family,” said patriarch and team owner Richard Childress. “Our whole family is involved, and I remember the very first championship with Dale Earnhardt. I had the same feeling tonight watching Austin, my grandson. It's just so special to have the family and know how hard all of them worked. Danny Stockman (crew chief), Bass Pro Shops, everybody on the No. 3 team did so much to help put it together. Austin kept it together so good under the pressure. For a 21-year-old guy, man, to be able to hang in there and do what he did was very special.”

Dillon, the 2010 NCWTS Rookie of the Year, becomes the first driver in the 11-year history of the NCWTS to earn the rookie title and then the driving championship the subsequent year. He also holds the honor of youngest champion to be crowned in the series’ history. Along with Ty Dillon, the 2011 ARCA Racing Series champion, the Dillon’s are the only brothers who have earned same- year championships on a national stock car tour.

“We definitely worked hard this year and accomplished this as a team,” said Dillon. “This was our goal at the beginning of the year and no one ever gave up. Danny Stockman and every member of the Bass Pro Shops team worked nonstop. We rebounded from so many little mistakes and unfortunate incidents this year—the hood flipping up at Kentucky Speedway, for example. It’s the way you react to the undesirable situations that show what a championship team is made of, and these guys reacted in all the right ways. This championship means so much to me and I’m thrilled to be able to represent my family, Richard Childress Racing, Bass Pro Shops and NASCAR as a champion.”

For a 21-year-old guy, man, to be able to hang in there and do what he did was very special.

At 29-years-old, the 2011 championship marks crew chief Stockman’s first in only his second year as a crew chief. Prior to joining RCR in December 2009, he earned two championships (’07 and ’09) in the NCWTS as a truck chief at Kevin Harvick, Inc.

“Like Austin said, the last restart was quite gut wrenching,” added Stockman. “Just awesome to be a part of this deal with Richard, Mike, Austin and Tina, and everybody that just let me have this opportunity to be a part of it. Austin Dillon is just a great up-and-coming race car driver. I am just really happy to be a part of it. We have a heck of a good race team, and just got to thank everybody back at the shop for all their hard work.”

The nation’s No. 1 outdoor retail leader, Bass Pro Shops, was positioned as the primary partner on Dillon’s No. 3 Chevrolet for the duration of the 2010 and 2011 race seasons. A long-time RCR supporter, Bass Pro Shops began its association with Richard Childress Racing in 1998 with associate sponsorship of the No. 3 GM Goodwrench Chevrolet Monte Carlo made famous by seven-time NASCAR Sprint Cup Series champion Dale Earnhardt. Bass Pro Shops’ partnership with RCR has also included sponsorship of the No. 29 Chevrolet driven by Kevin Harvick and primary sponsorship of Earnhardt’s eldest son, Kerry Earnhardt, in RCR’s No. 33 Bass Pro Shops Chevrolet for six Sprint Cup Series races in 2004. The company sponsored Ty Dillon for his season-finale race in the ARCA Racing Series this year.

“Congratulations to Austin from all of us at Bass Pro Shops, Tracker Marine and all our Tracker independent dealers,” said Bass Pro Shops founder Johnny Morris. “Austin is a fine young man who loves racing, loves the outdoors and has a great future ahead of him. What a proud moment for Austin’s grandparents Richard and Judy Childress and his mom and dad Mike and Tina Dillon.” 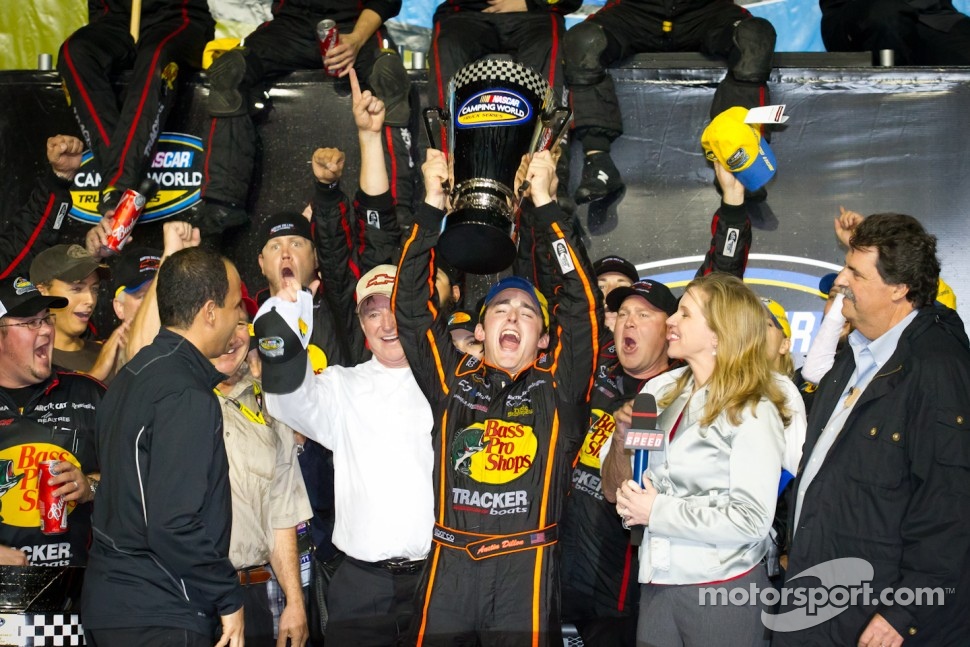