Sauter: "I just didn't have anything left" to take the fight to Bell 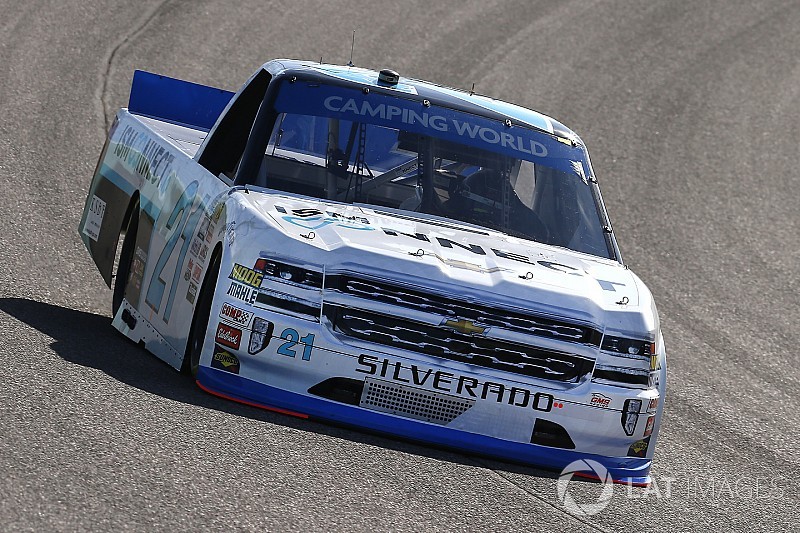 When the checkered flag flew in the Ford EcoBoost 200, Christopher Bell had nearly a 13-second gap to his nearest competition in the championship battle.

Bell finished second to race-winner Chase Briscoe while title rival Johnny Sauter came home third, but there was nearly half a lap between the two drivers.

"We just started the race way too free, the loosest I had been in I can't remember how long," explained Sauter. "It's been a long time. You know, we made some good adjustments on the first stop with our ISMConnect Chevy. The guys did a good job, and I had a little bit better fire‑off speed on the next restart, but it just eventually would just go away on me. It would just die. Just way too free, especially corner exit, which is crazy.

"You know, I could never commit to the top. I'd have to drive in straight and shallow into the corners because it was so free, and then I could make really good time doing that using a little bit of brake and then just part throttle and up off the corner."

However, Sauter was able to find more pace than the No. 4 KBM Toyota at one point, but it was too little too late.

"At one point there with like 25, 30 to go we were actually running quicker than the 4, I just didn't have anything left. I just absolutely could not touch the throttle on the corner exit. But we gave it all we had, and when it comes down to one race like this, that's what you've got."

Austin Cindric and Matt Crafton expressed similar frustrations. Both drivers struggled to get a handle on their trucks, finishing fifth and sixth, respectively.

"Well, I thought we were really, really good," said Crafton. "We dropped the green, and as bad as we were today during practice, when we took off, it was like, whoa, we've got something for these guys, and about halfway, three quarters of the way through the run we started getting freer and freer and freer and then just lost all forward drive off the corner. Made an adjustment and really kind of numbed to it, and the last adjustment made it a little bit better, and then about halfway, three quarter way through the run it just lost all drive again."

Cindric engaged in a brief battle with Bell at the start of the final stage, but fell back several seconds as the run progressed.

"Actually, a lot of my comments when it comes to our race truck actually sound a lot like Johnny (Sauter)," said Cindric. "I could never really find myself committing myself to the top until it came to about 10 to go where I said it didn't matter because I'm in fourth, so I've got to run down Crafton.

"But yeah, super loose all night. Awesome on short run speed, so I felt like if we were able to get a restart there, put on tires, I thought we were going to be some form of a threat ... Had a lot of fun tonight. First time I've had to pedal a car in a mile‑and‑a‑half. I've got a few more things to put in the memory bank, and hopefully this performance will help me solidify some stuff for next year."

For Cindric, it was still a successful night despite coming short of the crown. In his rookie season, he was able to finish third in the championship standings as his teammate Briscoe took his maiden victory. With Brad Keselowski Racing shutting their doors, Cindric hopes his performance is enough to attract the attention of prospective owners.

"Just to be in the playoffs and just to be in the final four, I think it's a huge step forward for me. Obviously it puts a lot of eyes on you in high‑pressure situations, and lots of team owners want to know how their driver is going to work in a high‑pressure situation, and I think we executed as well as we possibly could have all throughout the playoffs.

"Looking back at every race, even getting caught up in incidents, even getting dumped, we'd still come back, finish in the top 10, finish as good as we could have, getting the most out of our race truck. So that's the most I could ask for, and like I said, I think next year is still a bit of a work in progress, but I'd love to be on the NASCAR circuit and doing as many races as I can, and obviously this place is a lot of fun, so hopefully I can come back next year and be racing for a championship in some form of something and be able to have the same experience we had tonight and use that experience I learned today."