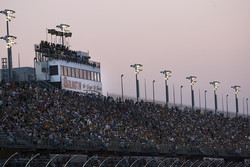 The sun sets over Darlington

DARLINGTON, S.C.—Kasey Kahne did it again.

Making his first and possibly only Camping World Truck Series start of the year, Kahne cruised to a relatively comfortable win in Saturday’s Too Tough To Tame 200 at Darlington Raceway.

The victory made Kahne the first driver in the truck series to win three of his first four starts.

Second alongside Elliott Sadler on a restart with 53 laps to go, Kahne immediately dispatched of Sadler—who had taken two tires under the previous caution—and never trailed again.

Kahne held on through three more restarts, including a final one with three laps to go, to take the checkered flag ahead of four-time series champion Ron Hornaday Jr. and 2010 Darlington winner Todd Bodine. Matt Crafton and James Buescher completed the top five.

Kahne’s stiffest challenge over the final laps came from Bodine, who once moved alongside before getting loose and falling into the clutches of Hornaday.

“I gave it a shot and got sucked around and got loose and all that and finished third,” Bodine said.

Kahne, a full-time driver in the Sprint Cup Series since, scored truck wins at Darlington and Homestead-Miami Speedway in 2004 and finished second last year at Pocono Raceway.

“This is one of my favorite racetracks,” said Kahne, who qualified second and led four times for 95 of the 147 laps. “I’m really glad I came. I really enjoy driving this thing.”

Matt Crafton remained the series leader, stretching his advantage to six points on rookie Cole Whitt, who moved into second after three races. Whitt finished an impressive eighth after starting from the pole and leading twice for 30 laps before dropping back with a pit-road mistake and engine issue.

Whitt, 19, was making his fourth career truck series start, his first at Darlington.

“The track just kind of suited my driving style, and from the get-go we just kind of fell into the rhythm,” Whitt said.

The race was slowed by 10 cautions, including one for a three-truck wreck involving Johanna Long, Ricky Carmichael and Nelson Piquet Jr. that brought out the red flag for 7 minutes, 37 seconds.