Nemechek and Custer hope to battle for the 2016 Truck title 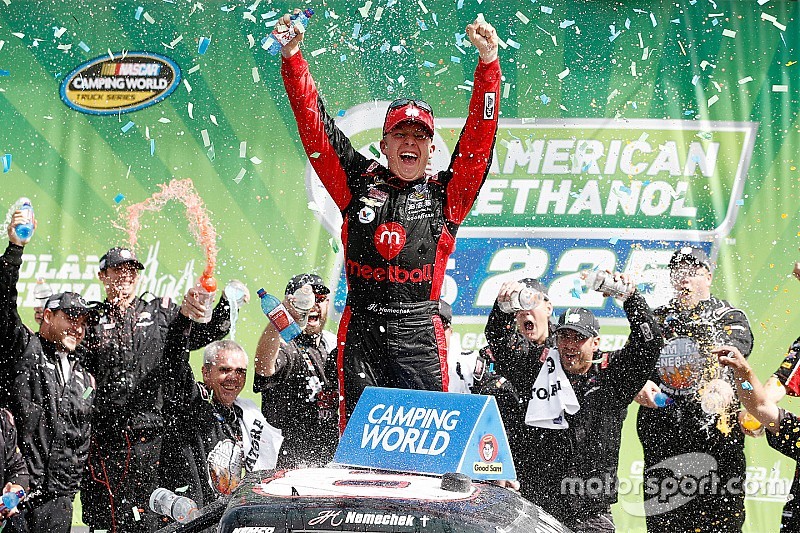 Two of the Camping World Truck Series’ recent winners and its youngest drivers – Cole Custer and John Hunter Nemechek – hope to battle each other for the series championship next season.

Nemechek earned his first series victory last weekend at Chicagoland Speedway and has split time in the No. 8 Chevrolet with his father, NASCAR veteran Joe Nemechek, this season.

John Hunter, the fourth-youngest driver to win in the series, is hoping to compete fulltime in Trucks next season now that he is old enough. He and Custer could only run tracks less than 1.25 miles in length until they turned 18. Nemechek turned 18 in June; Custer turns 18 on Jan. 23.

“Who knows what the future may bring. Hopefully we’ll be able to sign a big contract with one of these bigger teams and keep moving up the ladder.”

Both Custer and Nemechek are competing in Saturday’s UNOH 175 at New Hampshire.

Taking it to the next level

Custer, who has run a partial schedule this season with JR Motorsports this season, confirmed Friday he will run fulltime with the organization in 2016. Custer’s father, Joe, is executive vice president of Stewart-Haas Racing.

“I’m looking forward to running fulltime with JR Motorsports next year and running for a championship,” Custer said.

Custer also plans to run the ARCA series opener at Daytona International Speedway next February in preparation for running the 2016 Truck series opener, which he already has approval for, despite no previous starts on a superspeedway.

Looking back, ahead of NASCAR's 500th Truck race