New carburetor gets Buescher to victory lane at Chicagoland

The No. 31 Turner Motorsports Chevrolet team had to change the carburetor on their truck during the American Ethanol 225 NASCAR Camping World Truck Series race at Chicagoland Speedway in Joliet, Ill., on Saturday night, causing driver James Buescher to go two laps down. But Buescher got both of his laps back and raced to the front to take his third win of the season.

"Definitely, the best change we made all day was the carburetor," Buescher said in victory lane.\ Brendan Gaughan finished second in the No. 2 Richard Childress Racing Chevrolet after leading 83 laps of the 150-lap event. Last weekend's winner at Iowa Speedway, Timothy Peters, was third in the No. 17 Red Horse Racing Toyota.

"We tried some stuff when we tested in Nashville, and we hit on something and brought it here," Peters said. 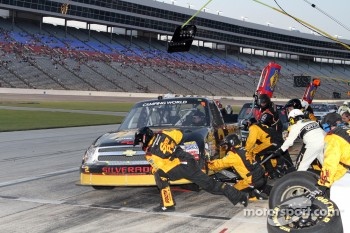 Peters started the race in the back after an engine change prior to qualifying earlier in the day on Saturday. With his third-place finish, Peters moved out to a 23 point lead in the championship points standings.

Justin Lofton started on the pole, with Gaughan's RCR teammate, Joey Coulter in the No. 22 Chevrolet, alongside in second. Gaughan made his way up to second early in the race, but Lofton had already pulled away. Gaughan took the lead on a restart following the first caution of the race that came out on lap seven.

With Gaughan leading the way, Peters worked his way from the back into the top-10 to claim the ninth spot by lap 30.

Gaughan lost several spots when he opted to take four tires under a caution just before lap 100 while several others took only two. Coulter got off pit road with the lead by taking fuel only, and a third Richard Childress entry, the No. 3 Chevrolet of Ty Dillon, restarted second after taking only two tires.

Lofton claimed the lead on the restart after a three-wide battle with the RCR duo of Coulter and Dillon. With 34 to go, Dillon reclaimed the lead and Lofton then lost second to Gaughan. Gaughan retook the lead from his teammate with 18 laps to go.

The yellow flag waved for the No. 32 Turner Motorsports Chevrolet of Miguel Paludo with 15 laps to go, and Peters took the lead from Gaughan on the restart that followed. "Right now, we have the class of the field," Gaughan said. "On that restart, I spun my tires and gave everyone else a chance."

With seven laps to go, Peters lost the lead to Buescher, just before Lofton brought out the seventh and final caution of the race with seven laps remaining.

"These guys never give up," No. 31 cre chief Mike Shelton said. "James never gives up." When the race restarted with two laps to go, Buescher and Peters raced side-by-side for the top spot until the white-flag lap. Buescher took the lead on the final lap and Gaughan got by the No. 17 for second.

Matt Crafton finished fourth in the No. 88 ThorSport Racing Toyota, and Parker Kligerman rounded out the top-five in the No. 29 Brad Keselowski Racing Ram. The win is Buescher's third victory of 2012.

"This is a good way to start this next stretch (of the season)," Buescher said.