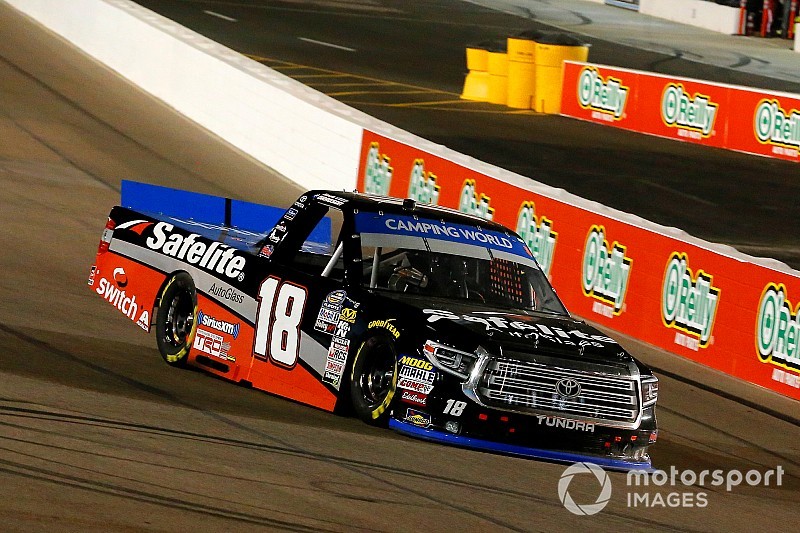 There’s a simple reason for that. He’s never been in this position before.

Gragson, does however, plan to make the most of his opportunity, which will also mark his final start with Kyle Busch Motorsports. Gragson is moving up to the Xfinity Series next season and will compete with JR Motorsports.

First, though, is the unfinished business of a Truck series championship.

“I talked to Christopher Bell, William Byron, Joey Logano quite a bit, as well as Kyle Busch. I don’t know if I'm feeling excited, if I’m feeling nervous, if I feel the pressure,” Gragson said Thursday during Championship Media Day.

He is looking to become the third driver from KBM to win the Truck championship. Erik Jones captured the organization’s first driver title in 2015 and Bell won last year’s championship. KBM also has won a series-record six owner’s championships.

Gragson has just one win on the season (at Kansas) but also finished second three different times. He also has championship veteran crew chief, Rudy Fugle, working with him, someone who can clearly be a difference-maker when it comes to race strategy.

“We have to make good changes and be smart throughout the race. I think it’s going to be a long race and we’re going to be battling the race track – that’s for sure,” he said.

“Just need to keep all four tires on the race track pointed in the right direction and we have to battle. We have to battle harder than we have all year, but I think we should be all right.”

Chance of a lifetime

Gragson does not plan to squander the opportunity.

“Most importantly, I’m getting the chance to do something I’ve always dreamed of, and that’s to race for a championship in the Truck Series. I would have never dreamed that I’d be in this position as a young kid,” he said.

“Rarely in life do you get an opportunity like this. I just have to enjoy it and make the most of my opportunity and just ultimately have some fun and do my job – and that’s to go out there and win the race.

“If you win the race, you win the championship. All is said and done. Just got to do what we’ve done all year, go out there and lead laps and run fast.”

GMS Take on Trucks: Time to go after a championship