Announced in May, Peck Motorsports will unload their No. 96 Chevrolet with new colors of primary sponsor, Stopain®. They truck will also carry the colors and logos of the Arthritis Foundation. Stopain is the first official primary sponsor of the race team for the season. The company is working closely with Peck Motorsports and their strong collaboration with the Arthritis Foundation. 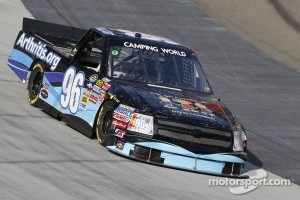 "We are planning to get through Iowa with a solid finish. We want to race all the laps and hopefully come away with a top-15 result and build on that. The goal is to race at least four or five more events the second half of this season. But, right now, we're focused on having a strong performance at Iowa with Stopain and all our partners."

The team and Stopain will host two families whose children suffer from juvenile arthritis. The families will be guests of Peck Motorsports Saturday at the track. It is part of the team's continued goal to raise awareness for juvenile arthritis and the Arthritis Foundation's "Kids Get Arthritis Too" platform.

Peck will be looking to make his fourth start in the Camping World Truck Series this weekend.

"There has been a lot of work put into our race team since last year, both on our business and competition side. Our biggest news has been the addition of our partner Stopain for this season. They have been a great addition. We've been busy working with them and the Arthritis Foundation to help get their message out about their product and how they are helping people living with pain. It's really been a great and natural partnership for us. We're having a lot of fun off the track, but now we're ready to go race.”