Peters is back in the points lead for the second time this season.

POINTS LEADER, AGAIN: After a solid fifth-place run at Kentucky Speedway, Timothy Peters regained the NASCAR Camping World Truck Series points lead for the second time this season. The No. 17 Red Horse Racing Toyota Tundra team races into Iowa Speedway for the American Ethanol 200, full of momentum. In three starts at the 0.875-mile tri-oval, Peters has earned one top-ten finish in the Series debut at the track in 2009, while encountering engine woes the following year. Peters collected an 11th-place finish last season. 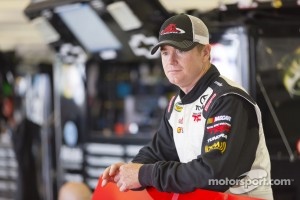 In eight starts this season, Peters has piled up an impressive five top-five and seven top-10 finishes, with an average starting position of 8.0. Peters remains the Series highest average finisher with a 6.0. He is one of only four drivers to have completed 100% of the laps raced this season, with 24 laps led to his credit.

BABY ON THE WAY: Peters announced at Kentucky Speedway during post-race interviews on SPEED, that he and his wife Sara are expecting their first child. Baby Peters is already accustomed to the number 17 - the couple's due date is December 17.

BACK HOME: Iowa Speedway is home to two crew members on Peters' Toyota Tundra. Dennis Croxell was raised in Eagle Grove, Iowa, two hours from the Speedway. Croxell, a mechanic both in the shop and at the racetrack - started racing behind the wheel participating in the Sports Car Club of America (SCCA). His move into the NASCAR scene started in 1996 in the Truck Series.

An hour and a half drive from the Speedway is a town called Vinton that Cory White calls home. White serves as an in shop mechanic and travels to the track race day as a tire carrier for the No. 17 team. Racing dirt late models is where White got his start before his NASCAR opportunity opened up in 2000.

MEET PETERS: Your chance to meet Timothy Peters on Saturday at Iowa Speedway: Peters together with teammate Todd Bodine will meet up with other Truck Series drivers for an hour long autograph session. The session will run from 2:15-3:15pm in the Midway area under the north grandstand in turn four.

CHASSIS HISTORY: This weekend at Iowa Speedway, the No. 17 Red Horse Racing team will unload Chassis No. 093. Peters tallied his sixth top-10 finish with this chassis at Dover International Speedway in June. Earlier this season in April, Peters drove this chassis to a fifth-place finish at Rockingham and took over the points lead. This chassis also competed in five events during the 2011 season including Iowa Speedway, Kentucky Speedway in the fall, Las Vegas Motor Speedway, Texas Motor Speedway in November and at the season finale at Homestead-Miami Speedway. It had its best qualifying effort at Rockingham in April with a third-place starting position and best finishing position of third in Las Vegas last season.

PREVIOUS RACE RECAP: When the green flag dropped at Kentucky Speedway during the Thursday night race on June 28th, Peters was eager to boost his best finishing position at the 1.5-mile track. Battling grip in his No. 17 Red Horse Racing Toyota Tundra during the UNOH 225, the driver persevered to capture his fifth top-five finish of the season, leaving the track as the Truck Series points leader.

Talk a little bit about Iowa Speedway and your results at the track. "I really like Iowa Speedway. It's a short track with a mile and half type speed. It's a unique race track. I'm always a fan of short tracks when I go back. It's where I started racing and always provides a really good show."

Your average finishing position is a 6.0. What can you attribute your consistent season to? "I think it's a team effort. We have taken what we have and really made the best of it -- Going out to get the best finish that our Toyota Tundra can give us. All the guys work hard and I try to not mess up where they are making gains. Our pit crew has also done a great job on pit road. I've always been the type of racer, not to jeopardize the equipment. We really want to get those wins and I think we will start soon."