Crew chief Chris Carrier made a last minute call to leave Nelson Piquet Jr. out on the race track in the No. 30 Turner Motorsports Chevrolet in the closing laps of the VFW 200 NASCAR Camping World Truck Series race at Michigan International Speedway on Saturday. The call paid off, as Piquet stayed out front to claim his first-career series win.

"It's finally an amazing moment that I made it in the truck series," Piquet said.

Jason White also made the late-race fuel-mileage gamble and finished second in the No. 23 GB Racing Ford. Dakota Armstrong was third in the No. 98 ThorSport Racing Toyota.

It's finally an amazing moment that I made it in the truck series.

Joey Coulter started on the pole in the No. 22 Richard Childress Racing Chevrolet, but lost the lead to Piquet on lap one, and quickly lost second to Busch, who was competing in the Truck Series for the first time in 11 years in the No. 188 Kyle Busch Motorsports Chevrolet.

Brad Keselowski stayed out to inherit the lead when the first caution of the race came out for debris on lap 12. Piquet got off pit road first during the caution to restart second. Busch got by both of them on the restart and led much of the remainder of the race.

Piquet moved up to second just a few laps later, and Keselowski pitted under green on lap 28, going a lap down.

Busch and Piquet pulled out to a three-second cushion over the rest of the field by lap 30, but that margin was erased by the yellow flag for another debris caution on lap 38.

Track position was lost by the two front runners during the caution when Todd Bodine in the No. 11 Red Horse Racing Toyota and John Wes Townley in the No. 09 Robby Benton Racing Toyota took only two tires to get off pit road with the first two spots.

Townley lost several positions when the race went back to green, but Bodine was able to stay up front for a few laps until Busch and Piquet made their way back up to the first two spots in the running order on lap 44.

Bodine was involved in the next two cautions that came out on lap 46 and 51, backing his truck hard into the wall, ending his race for good, on lap 51. 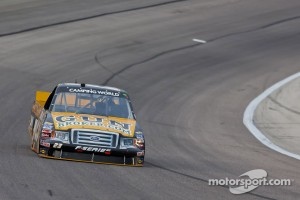 While many of the front runners stayed out, several drivers, including Piquet and White, headed down pit road for fuel only.

By staying out, Busch was back up front, but this time, Johnny Sauter was second in the No. 13 ThorSport Racing Toyota.

Busch and Sauter started a cycle of green-flag pit stops with 22 laps to go, and eventually most drivers made their way down pit road. Fuel strategies varied, allowing them to come off pit road in front of Busch and Sauter. Keselowski and the No. 31 Turner Motorsports Chevrolet of James Buescher took fuel only.

After making their final stops during the fifth caution of the race, Piquet and White stretch their final tank of fuel to 43 laps to claim the top-two spots.

"I've watched several races in this series, and the other two series end like this," on fuel mileage," No. 30 crew chief Chris Carrier said. "He does it naturally, I don't know how."

Armstrong's team also took the gamble, expecting the driver to make his last tank of fuel last 43 laps and eliminating the possibility of a slow pit stop.

"We were having trouble in the pits today," Armstrong said.

The fuel-only calls put Keselowski and Buescher in positions to finish fourth and fifth.

Finishing sixth through 10th were Ty Dillon in the No. 3 Richard Childress Racing Chevrolet, coulter, Parker Kligerman in his first race with the No. 7 Red Horse Racing Toyota team, Busch and Miguel Paludo in the No. 32 Turner Motorsports Chevrolet.

Ben Rhodes: "Everyone is racing a little bit dirtier" in Trucks