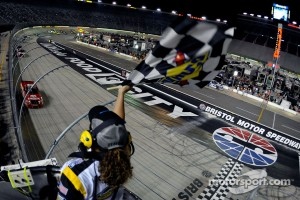 Bristol, Tenn. (Aug. 23, 2012)-- For the first time since 1997, a driver in the NASCAR Camping World Truck Series led all of the laps en route to the victory. Wednesday night, Timothy Peters was the driver who repeated history and made it happen in dominating style in the UNOH 200 at Bristol Motor Speedway. Starting from the outside of the front row and leading all 204 laps, including a green-white-checkered finish, Peters nabbed his second victory of the year.

Unloading for practice on Wednesday with a stout setup underneath their No. 17 Red Horse Racing Toyota Tundra, Peters and crew chief Butch Hylton made only minor adjustments during both sessions to help the balance. Peters followed up his practice comments by laying down the second quickest lap in qualifying to place him on the outside of the front row for the 200 lap shootout.

"I can't thank you guys enough for this Tundra. You should see the view from where I'm at out here on the front row. It's amazing," Peters radioed to the crew during the pace laps.

His comments would preface the view he would have for the duration of the night, as he jumped ahead of the pole sitter before turn three on the first lap, quickly putting the rest of the NASCAR Camping World Truck Series (NCWTS) field in his rear view. Maintaining patience through the first green flag segment of the race with help over the radio from Hylton and spotter Tony Hirschman, Peters cleanly weaved his way through slower traffic without any issues.

Under the first caution of the night on lap 82, Hylton elected to bring his driver down pit road for four tires, fuel and a very small adjustment. The Red Horse Racing pit crew went to work and clicked off a blazing fast stop, putting Peters back on top without losing the lead. Able to make it to the rest of the way on fuel, Hylton relayed to Peters that he needed to take care of his Tundra and save his tires through the second half of the race.

With a commanding restart, Peters once again resumed his reign over the field and continued to control the restarts through the next four cautions. The minor adjustment made under the night's lone pit stop was just enough to help the NCWTS points leader maintain a several truck-length lead over second place throughout the second half of the night and Peters was set to cruise to the finish.

A late race incident with five to go shook things up and set the field up for a green-white-checkered finish, placing Peters in the hot seat with competitors drawing up to the back bumper of his Toyota Tundra. His confidence unshaken, the Red Horse Racing driver wheeled his No. 17 machine through another great restart and held off the field to take the checkers.

"It's an awesome feeling to go out there and lead every lap like that. These races are so hard to win anyway, and to do it in that fashion is just unbelievable," Peters recapped after his visit to victory lane.

"This Red Horse Racing team works so hard to give me fast Toyota Tundras like I had here tonight and I can't thank them enough. When you have a team like we do, with the work ethic and attitude that they have, it just pushes me to perform that much better. This win is a great birthday present to our owner Tom DeLoach, who gave me an awesome opportunity back in 2009 to drive for this team and the sky has been the limit ever since.

"We had great speed in our Tundra during the first practice, but a flat tire kind of got us off track a little bit during the second practice. Butch Hylton is so good about getting this team together and used his experience to calm us down and make the changes. Boy, this truck was flawless tonight."

Hylton followed up Peters' comments with compliments to the wheelman and his performance not only at Bristol, but throughout the season thus far.

"Timothy drove his guts out tonight. He was absolutely flawless on the restarts and that really sealed the deal for us. I know how hard he's worked on that and on improving on everything this year. He's really done his homework and we've really started to come into our own as an organization. I just feel blessed to have a race like that and work for a team like this," Hylton said.

The victory helped Peters extend his NCWTS championship point lead to 17 points over second place. Teammate Parker Kligerman completed the top-two sweep by finishing in the runner-up spot. Driving the third Red Horse Racing entry, Todd Bodine raced solidly inside the top-five until contact with 40 laps remaining from another competitor sent him into the outside retaining wall and relegated him to a 31st place finish.