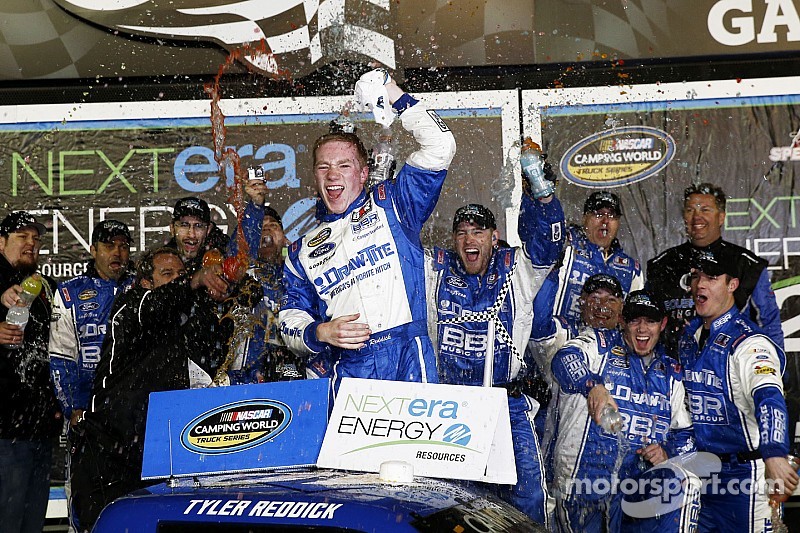 Tyler Reddick was able to hold his own at the front of the field.

After 18 starts in the NASCAR Camping World Truck Series, Tyler Reddick is finally a race winner. Driving for Brad Keselowski, the 19-year-old California native was able to hold off the pack with help from teammate Austin Theriault.

This is a great start to the year, and I can't think of a better place to be," Reddick said in victory lane.

The fight for P2

On the final lap, second place suddenly became a place of action with drivers going three and even four-wide across the stripe for the runner-up position. After a seven year hiatus from the series, Scott Lagasse Jr. performed well, finishing third. Theriault and Ray Black Jr. rounded out the top five.

"The Ford power was awesome, so we're really excited about the top-five finish," Theriault said.

There was a lot of stress taken off my mind when I saw that blue No. 29 behind me

Ty Dillon was the mainstay up front in the first half of the race, leading 37 laps before losing the lead to Reddick just before the halfway point that was punctuated by a caution for a multi-truck wreck that involved 13 of the 32-truck field. Drivers involved included Chris Fontaine, James Buescher, John Wes Townley, Spencer Gallagher, Todd Peck, Daniel Hemrick, Ben Kennedy, Cameron Hayley, Ryan Ellis, Johnny Sauter, Timothy Peters and Jennifer Jo Cobb.

"I never saw anything, it was a lot of overreaction but that's what you get with superspeedway racing," said Timothy Peters.

Just to epitomize how many vehicles were damaged tonight, know that Bryan Silas finished 7th at Daytona without a hood.

Reddick had battled Dillon throughout the first half of the race and was in the lead for after Dillon was penalized for heading down pit road while the pits were closed.

After battling Dillon in the first half, Reddick had Theriault to contend with in the second portion of the event. He was able to lead 46 of 100 laps. The front-runners, including Reddick, Theriault, Lagasse and Jones, ran single-file for much of the remainder of the race, until the the final lap with the checkered flag in sight when they fanned out in the tri-oval.

"There was a lot of stress taken off my mind when I saw that blue No. 29 behind me," added Reddick.

"I tried to lay back in three and four," Jones revealed. "Worked up to second, just couldn't get to the lead."