Restarts pay off handsomely for Toyota drivers at Iowa

Peters started from the pole and led 87 laps (of 200) on the 0.875-mile track en route to his fourth-career NCWTS victory. By virtue of his triumph, Peters extended his points lead in the NCWTS. Peters now leads second-place driver Justin Lofton by 12 points in the series standings. Peters has claimed one win in each of the last four NCWTS seasons.

How was your race tonight? "You don't get Toyota Tundras like this often and it was dominate. We sat on the pole. The testament goes to this team right here -- Butch Hylton (crew chief), all the guys back in the shop -- you work your butts off. Thank you so much. Joe Gibbs Engines -- how about that horsepower? This right here is for my dad. It will be 11 years Tuesday that I lost my dad, so this was for him. Man, I'm going to be a dad -- that's kind of scary in itself too." 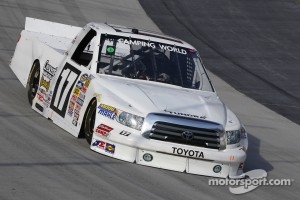 How much fun was tonight's race? "This was awesome right here. These fans are awesome -- I love coming to Iowa. We unloaded yesterday okay, but Butch (Hylton, crew chief) and all the boys made great adjustments throughout practice and got our Toyota Tundra to where we could just really run the bottom and use a whole lot of throttle. It all starts back at the shop though. Can't thank the guys back at the shop enough for what they do -- Tom DeLoach (co-owner) for giving me the opportunity back in June of '09. It's just been an awesome ride ever since. This was for my dad. Eleven years Tuesday I lost my dad. We got him a win and we did it in the top-three series in NASCAR. I'm going to be a dad. I'm leading the points. Life is good."

How important was it for you to get a win? "Well, we were top-five and 'top-tening' them to death. We got a little off our game at Texas and we still finished 11th, so we told the guys afterwards -- I was like, 'Keep you head up. I'm keeping mine up. If 11th is the worst we finish all year, them boys better look out.' And we knew a win was around the corner, but oh my goodness -- I'm so glad it came here."

What was your plan on the final restart? "I was shaking in my pants. You've got the restart king (Ron Hornaday Jr.) on the outside and I'm just doing my normal deal. After Kentucky, I really went to work thinking about what can I do to better or where can I be better on restarts, because I was just so horrible there. Hornaday got in front of us, but I made sure that I was going to get back by him. Thanks Johnny Sauter -- he gave us a good push. He was going to duck under, but I threw the block on him. Nevertheless, Toyota in victory lane."

What do you attribute this win to? "Perseverance and determination, man. You should have seen the shop. Last year at this race track here was the reset button for Butch Hylton (crew chief) and myself and we just made a notebook and got on a roll and over the off-season he implemented a lot of good stuff and our Toyota Tundras are fast."

How much fun were the restarts at the end? "It was a blast to drive. We had really, really good restarts. Lost a little track position on that last stop. Never can complain, ever can complain about what they do, because they do such an awesome job usually. Had a bad run the last one. Had a really good truck. These guys brought an awesome Menards Toyota Tundra to the race track. Just needed track position. As you saw when (Ron) Hornaday got out front and then he was just checked out and then the 17 (Timothy Peters) got out front right there at the end and it was all about track position tonight. Can't thank these guys enough for how hard they've been working and making these trucks fast each and every week." 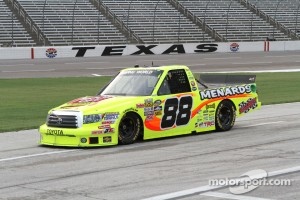 How critical was track position? "Track position was everything. Timothy (Peters) and them had a really great truck. I really, truly believe after we would have had track position, we would have had something for him. Like the very first run, it was decent -- it just took a little for it to come in and then we made an air pressure adjustment on the next one and it came in a little bit better. But, right here on this last one we never had long enough runs to get our truck going.

This Menards Toyota Tundra -- it just needed a few laps, more laps to get itself going, but all in all not a bad night. It sucks not being over there in victory lane from last year -- it's kind of bitter actually. All in all, it was a good points night and top-three finish and third and fourth for ThorSport (Racing) and Dakoda (Armstrong) ran up there for quite a while as well, so that was definitely a good night for ThorSport."

How was your race tonight? "The Hot Honeys/Curb Records Toyota was loose in all night and a little bit tight off. I don't know what the deal was on the restarts -- we just get killed. I can't anticipate it any better. We've got to work on something and make sure we get up through the gears better. I don't know if it's horsepower or what. Triad (Racing Technologies) -- all the guys do a great job.

Just we're missing something there, but nonetheless proud of everybody at ThorSport (Racing). Great race. Just my truck wouldn't go on-and-on-and-on on restarts. It took about five laps for it to come in. I felt like I could run faster lap times than those guys in front of me. I just -- you've got to be able to fire off in this series and we didn't have that tonight."