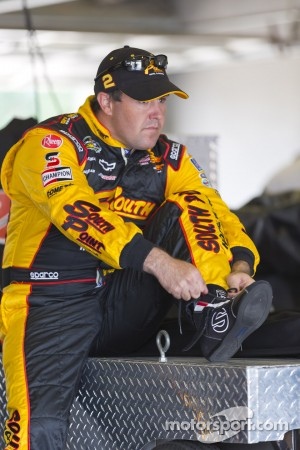 Brendan Gaughan and the No. 2 South Point Hotel & Casino team brought home a top-five finish in the NASCAR Camping World Truck Series UNOH 200 Friday night under the lights of Bristol Motor Speedway. The Las Vegas native started the race from the 11th position and worked his way into the top 10 within the first 25 laps of the event. During the early portion of the 204-lap race, Gaughan informed the team that he was battling a loose-handling condition on the entrance and exit of the turns. On lap 82 crew chief Gere Kennon called Gaughan to pit road for four tires, fuel and a chassis adjustment to correct the handling issue Gaughan was fighting on the No. 2 Silverado. The 37-year-old driver returned to the track in the ninth position and was shuffled back to 14th on lap 93 when he alerted the crew the chassis adjustment made the truck too tight in the corners. Gaughan forged on and worked his way toward the front of the field during the final laps, crossing the finish line in the fifth position.

BRENDAN GAUGHAN QUOTE: "This was a great finish the for the South Point Hotel & Casino team tonight. We started out with a really loose truck and went a little too far with our adjustment, and I had to fight a tight handling truck during the second half of the race. I'm really proud of the whole RCR organization and the great equipment they bring to the track each week; it's such an honor to be part of this team."

In their first career NASCAR Camping World Series start at Bristol Motor Speedway, Ty Dillon and the No. 3 Bass Pro Shops Chevrolet team were positioned in the top five for the final restart of the night before running out of fuel with three laps remaining in the UNOH 200, resulting in a 21st-place finish. Dillon started the 204-lap event from the 12th spot and settled into position for the next 50 circuits around the Bristol, Tenn.-based facility. A tight-handling condition developed on the No. 3 Chevrolet over the course of the long green-flag run. The first caution flag of the night was displayed on lap 80, and Marcus Richmond called Dillon to pit road for four tires, fuel and an air pressure and chassis adjustment. Gaining five positions on pit road, the No. 3 Chevrolet lined up 10th for the restart on lap 87. The 20-year-old driver maintained his position within the top 10 and ran there for the next 100 laps. Breaking into the top five on lap 171, Dillon reported the handling on the black and orange Chevrolet had improved over the long green-flag run. The 2011 ARCA Racing Series presented by Menards champion was scored in the fourth position when a caution flag slowed the field on lap 194, setting the stage for a green-white-checkered finish. As the field circled the half-mile concrete oval to take the final green flag, Dillon radioed to the Richard Childress Racing team that the No. 3 Bass Pro Shops Chevrolet was out of fuel, which ultimately relegated them to a 21st-place result.

TY DILLON QUOTE: "It's really disappointing to have such a fast Bass Pro Shops Chevrolet and run out of fuel at the end of the race. I thought we could have contended for the win there at the end but when the green flag waved and I hit the gas, there wasn't anything there. I hate it for these guys. They worked really hard all day."

Joey Coulter drove the Richard Childress Racing No. 22 Steak-umm Chevrolet to a fourth-place finish in the UNOH 200 at Bristol Motor Speedway, after racing in the top-10 throughout the entire NASCAR Camping World Truck Series event. Qualifying his Chevrolet Silverado in the eighth position, the 22-year-old driver spent the early laps of the Wednesday evening event racing in the top-10, while attempting to avoid trouble at the concrete bullring. As the race neared the halfway point under the lights at the Bristol, Tenn.-based track, Coulter was caught behind lapped traffic but able to maintain his eighth-place running position. The one-pit stop strategy approach to the 204-lap event proved to be enough for the No. 22 Steak-umm team, as Coulter had no complaints regarding the handling of the Richard Childress Racing Chevrolet throughout the race. As the laps wound down, the Miami Springs, Fla., native utilized restarts to gain track position, placing the Steak-umm Chevrolet in position for the victory on a green-white-checkered finish before ultimately crossing the line in the fourth position.

JOEY COULTER QUOTE: "The guys on the No. 22 team work hard each and every weekend and I couldn't be more proud of their effort tonight with the Steak-umm Chevrolet. Its finishes like these that are going to keep us in contention for the (NASCAR Camping World Truck Series) championship."