MOORESVILLE, N.C. - Turner Scott Motorsports (TSM) announced today that the four-time NASCAR Truck Series champion Ron Hornaday Jr. will be behind the wheel of the the No. 30 Chevrolet Silverado in the NASCAR Camping World Truck Series (NCWTS) season opener at Daytona International Speedway.

The seasoned NASCAR veteran will embark on his second-career start for TSM following a top-five finish in the 2013 season finale at Homestead-Miami Speedway. Sponsored by Rheem Comfort Products, the 55-year-old veteran will pilot the famed red and black Rheem paint scheme in the NextEra Energy Resources 250. Hornaday is no stranger to success at the 2.5-mile track, having 10 starts, two top fives and three top 10s in the NCWTS alone.

A long-time competitor in NASCAR's top series, Hornaday made his Truck Series debut nearly 18 years ago and is, to date, the all-time win leader in the NASCAR Truck Series with 51 wins in 355 starts. The Palmdale, Calif. native made his TSM debut last November at Homestead-Miami Speedway, starting from 11th position and fighting a tight battle until the end, ultimately finishing fifth. 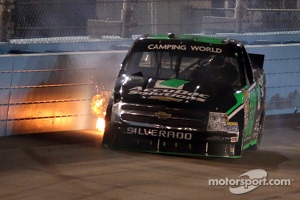 "I'm very excited and grateful to have support from Steve Turner, Harry Scott and the entire TSM organization," said Hornaday. "We worked great together in Miami and to have the opportunity to come to Daytona to start the year off; I'm just really looking forward to it.

I wouldn't have this opportunity if it weren't also for Rheem and their help. I think this is a winning combination that will give us a great chance to run up front and hopefully get a win."

"Ron Hornaday has been synonymous with competitive toughness and durability in all his days of racing. His hardnosed style and determination to win are legendary, but it's his lifetime of caring generosity shown to so many young racers who needed an encouraging word or a place to stay that makes Ron Hornaday so special. Rheem was honored to have the opportunity to provide support to ensure this Truck Series legend would be back on the track at Daytona," said Rheem Manufacturing Company President and CEO, JR Jones.

In its last visit to Daytona, Turner Scott Motorsports had a strong run in the NCWTS race, with all four entries starting in the top 10. With direction from former racer-turned-crew-chief, Shane Huffman, Hornaday completes the TSM roster for the NCWTS race at Daytona and will be running alongside teammates Ben Kennedy and Ryan Truex.

"I'm really excited about having a four-time champion in one of our trucks," said TSM co-owner Steve Turner. "Both Ron's team and our team are working diligently to get a full-time deal put together for the 2014 season. Ron will bring great knowledge to the young drivers in our fleet. We all feel like Ron is a class act, both on and off the track."

The NCWTS season kicks off on Friday, February 21 with the NextEra Energy Resources 250 at Daytona International Speedway. The 100-lap race begins at 7:30 p.m. EST and will air live on FOX Sports 1 and MRN.

Ryan Truex to compete for 2021 Truck title with Niece Motosports