Ross Chastain on verge of Truck playoffs with Iowa win 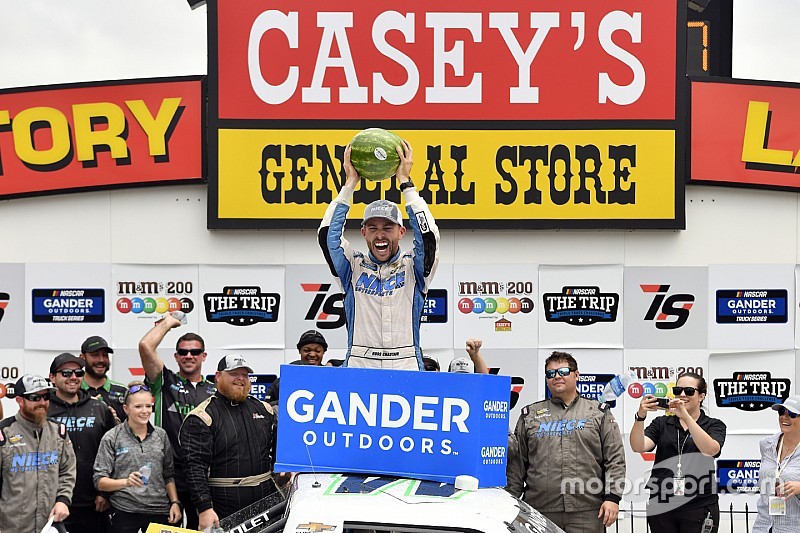 With the win, Chastain also collected an extra $50,000 as part of the Triple Truck Challenge. If he were to win the bonus again next weekend at Gateway, he would collect a total of $100,000 in that race.

Chastain grabbed the lead for the first time on a two-lap restart in Stage 1 and remained in command for the remainder of the race.

"This team is just so good. We started with a good baseline and just went from there. These guys are just so good - they make the race trucks go so fast," Chastain said after the win."You just don't know what it feels like to have race trucks that race like this - nothing else matters.

"This is what ever race car driver in the world is working toward is opportunities like this. We won another one! It means the world to get this opportunity.

To qualify for the series playoffs, Chastain must now be in the top 20 of series points by the conclusion of the regular season.

The win is his second this season with Niece Motorsports and second of his career in 68 starts.

On Lap 138 of 200, Austin Hill hit Johnny Sauter off Turn 4, which sent Sauter into the wall. In his wrecked truck, Sauter then returned to the track under caution and ran down Hill and wrecked him. Hill was able to continue on in the race.

Sauter was immediately parked by NASCAR for the remainder of the race and order to report to the NASCAR hauler after the conclusion of the event.

“I got better things to worry about than the No. 13 truck,” Hill said after the race.

The race returned to green on Lap 145 with Chastain in the lead, followed by Moffitt, Rhodes, Matt Crafton and Burton.

With 40 laps to go in the race, Chastain held a small lead over Moffitt with Rhodes running in third. Burton was fourth and Enfinger completed the top-five.

After 180 laps, Chastain had built a more than 1 second lead over Moffitt as Rhodes continued to run in third.

Chastain completed a sweep of both stages, dominating on his way to the win in the second 60-lap stage over Rhodes.

Following the break between Stages 1 and 2, only a handful of trucks elected to pit and Chastain led the way on the restart on Lap 67.

Sauter elected to pit for some repairs but was penalized for speeding on pit road and had to restart from the rear of the field.

After 80 laps, Chastain maintained just over a second lead on Rhodes. Smith had rallied from his extended pit road stop to correct radio issues and was running fifth.

With 30 laps remaining in the second stage, Chastain had moved out to a more than 2-second lead over Rhodes while Moffitt was running third.

After 110 laps, Chastain’s lead had expanded to 4.3 seconds over Rhodes. Moffitt ran third, Enfinger fourth and Smith remained in fifth.

Chastain went from third to first over the final two laps to claim the Stage 1 victory over Crafton.

Smith, who started on the pole, moved out to a 2.7-second lead over Crafton after the first 10 laps. Enfinger ran third, more than 3 seconds behind the leader.

After 20 laps, Smith had expanded his lead to more than 4 seconds. Enfinger remained in third, Sauter was fourth and Moffitt rounded out the top-five.

Halfway through the first stage, Crafton had cut Smith’s lead down to 3 seconds with Enfinger continuing to run in third. Smith had also reported radio problems as he was having difficulty with his radio communications with his spotter.

With 20 laps remaining in the first stage, Smith maintained an almost 3 second lead over Crafton Enfinger was closing on Crafton for a battle for the second position.

On Lap 53, Juan Manuel Gonzalez hit the wall off Turn 4 to bring out the first caution. Smith had an extended pit stop in order that his team could work on his radio issues.

Crafton was the first off pit road and took over the lead on the restart on Lap 59. He was followed by Enfinger and Rhodes.

Tyler Hill had to start the race from the rear of the field for making unapproved adjustments on his No. 56 Chevrolet.