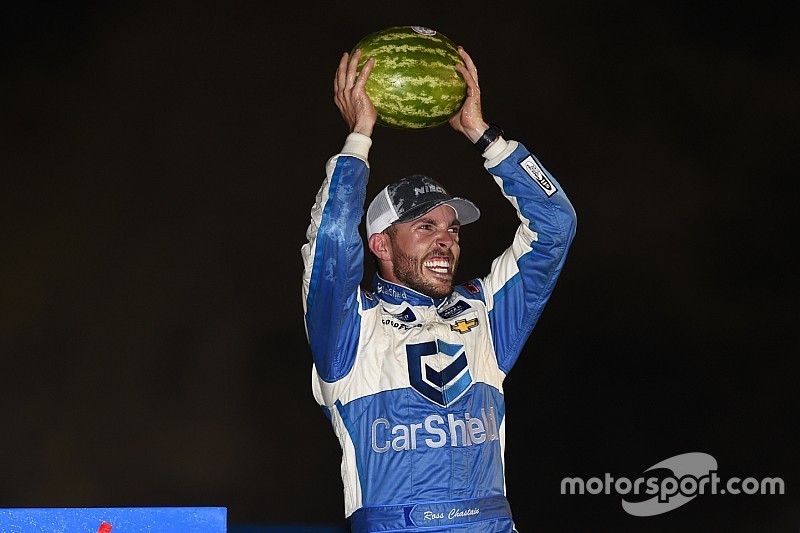 Finally, it seems, Ross Chastain’s 2019 NASCAR season appears to have gotten back on track but it still has a long way to go.

Chastain was expected to be competing fulltime in the Xfinity Series this season with Chip Ganassi Racing, which would be his best ride yet in NASCAR competition.

Unfortunately, the departure of the planned sponsor caused CGR to shut down its Xfinity program before the season even started and Chastain, 26, was left scrambling for any and all available rides.

He landed two – returning to JD Motorsports to run in the Xfinity Series and driving a truck for Niece Motorsports, the latter was not originally scheduled to be a fulltime opportunity.

“It all started in mid-December when that all fell apart and I’ve been trying to juggle everything ever since,” he said.

It’s not been easy.

In the last month, Chastain decided to make a game-changing decision – he would forgo the points he already earned in the Xfinity Series to switch to the Truck Series and run the entire schedule, hoping he could become a contender for the series championship.

The decision was made in part because Chastain was no longer guaranteed to run with the No. 4 team at JDM the remainder of the season. And if he wasn’t going to be in competitive equipment, there seemed little reason to remain committed to the Xfinity schedule.

“The toughest part about this is money – it all comes back to money. That’s the only reason everyone is upset. We were short (at JDM), we’ve been short and Johnny (Davis, team owner) has been trying to juggle it and I don’t know how he does it as good as he does,” Chastain said.

“To run as competitive as we want to run, more money has to be spent than what is being brought in. He’s just not a guy who has money to spend – he has to make money in this deal. I’m glad that over the last several years he’s been able to reinvest in his team.

“I know in years past, he couldn’t. He didn’t have money to buy new cars and new haulers. He’s been able to reinvest and make it a better team.”

Chastain had already been able to win a Truck race with Niece Motorsports earlier in the season and he felt certain the group could win again.

After all that had happened, to have the opportunity to still win a NASCAR championship this year was not something Chastain could step away from.

“I’ve put in four full years at Johnny’s minus my races at (CGR in 2018). That’s longer than anybody. Both Johnny and I wanted to get back together when everything (at CGR) fell apart and he lost Blake (Koch),” Chastain said.

“Yes, I know he’s upset and I’m the bad guy. I’m good with it, I’ll be the bad guy. I feel like it was our decision and it’s not all a one-way street.”

A major setback, or not

Two weeks ago at Iowa Speedway it all seemed to pay off, as Chastain won the Truck race (a $50,000 came with it) and would have little problem getting into top 20 in points in order to use the win to qualify for the playoffs.

But even before Chastain could begin the victory celebration, NASCAR announced his No. 45 Chevrolet had failed post-race inspection, becoming the first team to be stripped of a victory under the sanctioning body’s new policy.

That sent Chastain right back to where he started – no victory to qualify for the playoffs and still not in the top 20 of Truck series points.

So, what did Chastain do? The same thing he has done all season – rise to the occasion once again.

This time, Chastain’s No. 45 Chevrolet passed inspection. The victory will stand. He’s now 26th in driver points but only 44 points out of the top 20 with five races left in the regular season to make up the difference.

“These Niece guys went home, and we were mad, felt like we had one taken from us,” Chastain said after the win. “Phil Gould (crew chief), Lonnie Rush – they believed in me. I didn’t want to take tires, but then it was up to me to freakin’ hold them off, I don’t know how.”

The journey is not over yet.

Chastain may still be running some Xfinity races for JDM this season and he must stay out of trouble to claim the top-20 points position in Trucks.

Putting in the work

Then, the whole complexion of the season will change as he and his Niece Motorsports team will begin their quest to win a Truck Series championship.

“We’ve all put in the work,” Chastain said. “They started this team over three years ago and they struggled and I’ve struggled with other teams and we were racing against each other for 15th.

“We’ve put together a bunch of pieces like a bunch of misfits. We are – we’ve all been kind of pushed out of other places. All we want is to go execute and go win.”

Ross Chastain comes back from Iowa DQ with win at Gateway