Ross Chastain comes back from Iowa DQ with win at Gateway 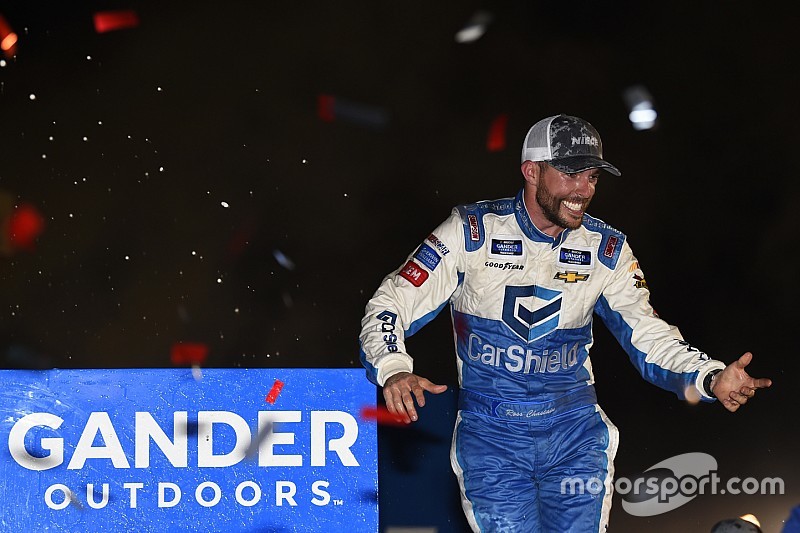 Following his disqualification after winning the most recent Gander Outdoors Truck Series race at Iowa Speedway, Ross Chastain responded with yet another victory at Gateway.

Crew chief Phil Gould made the risky call to take no tires during the final round of green-flag pit stops, allowed Ross to take the lead over Christian Eckes.

But a late-race caution then set up a seven-lap shootout where Chastain had to fend off the pack before taking the checkered flag. With the truck passing post-race inspection, the win became Chastain's first of the season that counts towards the 2019 playoffs.

"These guys went home and we were mad," Chastain said in Victory Lane. "Felt like we had one taken from us.

"I didn't want to take tires and then it was up to be to freaking hold them off. I don't know how. I'm going to take that money home and they're not taking it from us this time."

Grant Enfinger and Stewart Friesen battled for the lead in the early laps with Enfinger ultimately emerging on top.

Late in the stage, eventual race winner Chastain had a moment while trying to take fifth in the running. He threw a block on Matt Crafton which led to contact and nearly a wreck between the two drivers. But they both got away with it.

The returned to green for Stage 2 on Lap 44 with Enfinger ahead of Rhodes. Crafton would take second after the restart before Snider worked by them both, pursuing Enfinger for the remainder of the stage.

Before the final stage, a handful of trucks took two tires and shook up the running order. Eckes would take the lead for the restart ahead of Burton, Chastain and Gilliland. Enfinger opted for four tires and restarted back in fifth.

Chastain took them three-wide into Turn 1 and moved up into second behind Eckes. They and Burton were then able to break away until the critical green-flag pit stops beginning with about 30 to go.

Eckes took two right sides, Burton two left sides, but Chastain jumped both with a no-tire call. When Burton crashed after contact with Creed, Chastain was faced with a seven-lap shootout for the win,.

He held on with Eckes losing second to Gilliland at the white flag before getting spun off the nose of Friesen and finishing 14th.

"Yeah, got wrecked by the 52 again. It's unfortunate," he said afterwards.