Sauter claims first win of the season at Texas 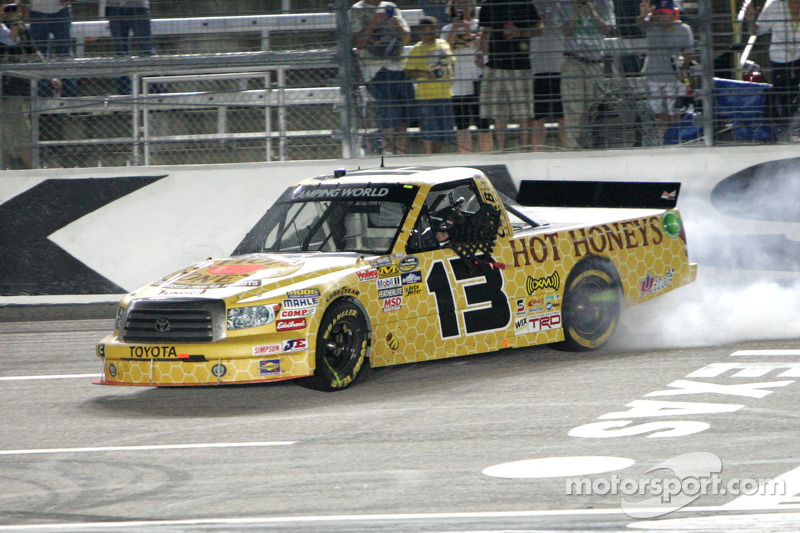 FORT WORTH, Texas (June 8, 2012) - Johnny Sauter coupled an early surge through the field with taking advantage of some late misfortune by the leaders Friday evening to win the NASCAR Camping World Truck Series WinStar World Casino 400 at Texas Motor Speedway.

Sauter (No. 13 Hot Honeys/Curb Records Toyota) posted his first win in a difficult start to the 2012 season, in which he had finished 24th or worse in five of his first six starts. The victory was the fifth of his career and first since winning last season's season finale at Homestead. It also was major redemption for Sauter, who squandered the win to Ron Hornaday Jr. in last year's WinStar World Casino 400 when he was black-flagged for a restart violation on a green/white checkered finish.

I've been fortunate enough to win some very cool races in the truck series.

"Every win is special, first of all, I've been fortunate enough to win some very cool races in the truck series," Sauter said. "Your first win is always special, but this one is going to rank right up there with the start that we've had. You know last year was tough, that's definitely the toughest loss I've ever had and to have a dominant truck, have a seven-second lead into the green/white checker and have a lane violation is just not the way you want to go out but I haven't forgotten that, I promise you. I think about that all the time and it's hard not to think about that coming back to the race track again because it's all everybody's talking about, remember what happened here a year ago so I was bound and determined not to make that mistake again."

Sauter started 20th and carved his way through the field to take the lead after just 55 laps of the 167-lap race. He fell out of the lead after a 19-lap stint up front and it appeared as the race wore on that it could shape up to be a battle between NASCAR Camping World Truck Series points leader and race polesitter Justin Lofton (No. 6 CollegeComplete.com Chevrolet), Plano, Texas native James Buescher (No. 31 Koike.com Chevrolet) and rookie Ty Dillon (No. 3 Bass Pro Shops/Tracker Boats Chevrolet). 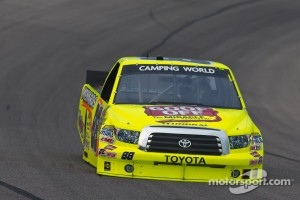 Lofton, who led the first 26 laps of the race, regained the lead on Lap 97 and began opening up a comfortable four-second advantage on his nearest pursuer, Buescher. Lofton was forced to pit with 41 laps to go, but the move proved costly as the caution came out for an accident by rookie Bryan Silas (No. 99 Rockingham Speedway Ford). Buescher inherited the lead and led the field into the pits for final pit stops, but it was Dillon who captured the lead out of the pits. Meanwhile, Lofton found himself restarting in 20th and out of contention.

On the restart with 33 to go, Dillon and Buescher were battling side by side for a few laps before Dillon got loose on the inside and the two collided. Buescher tagged the wall that caused some damage that brought out the caution and relegated him to 19th while Dillon made a great save and only fell to ninth.

Crafton, followed by Brendan Gaughan (No. 2 South Point Chevrolet), Coulter and Sauter, respectively, benefited from the incident as he inherited the lead when they restarted with 24 to go. Sauter quickly overtook Coulter and set his sights on Crafton.

Crafton was able to hold off Sauter for eight laps before Sauter took the lead on Lap 146 and held it for the final 22 and the victory. Sauter led two times for 41 laps while Lofton led a race-high 55 laps in a race that featured 13 lead changes among six drivers.

Lofton battled back to finish ninth and was able to expand his points lead from one to five over Timothy Peters, who was 11th.