Johnny Sauter took advantage of four fresh tires on his No. 13 ThorSport Racing Toyota in the closing laps of the WinStar World Casino 350 NASCAR Camping World Truck race at Texas Motor Speedway on Friday night to get by the No. 7 Red Horse Racing Toyota of Parker Kligerman with 11 laps to go to take the checkered flag and claim the win. The victory made for a Texas sweep for Sauter, who won at the track earlier this season.

"I just made sure I didn't screw up getting on pit road," Sauter said of his final pit stop of the race with under 30 laps to go. "I knew he (Kligerman) only took two tires, so it was just a matter of time."

Kligerman held on to finish second, and pole sitter Nelson Piquet Jr. was third in the No. 30 Turner Motorsports Chevrolet.

Piquet led the way early, holding the top spot until losing it to teammate and series points leader James Buescher in the No. 31 Turner Motorsports Chevrolet on a restart following the first caution of the race that came out on lap 31. 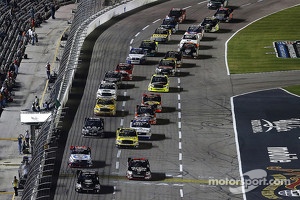 Nelson A. Piquet leads at the start

Prior to the caution, Buescher and Kyle Busch in the No. 18 Kyle Busch Motorsports Toyota swapped the second position several times behind then-leader Piquet, but Busch slid through his pit stall and lost several positions on pit road during the lap 31 caution.

Once Buescher got out front on the restart, he led until the second and final caution of the race came out on lap 64. Cale Gale got off pit road first in the No. 33 Eddie Sharp Racing Chevrolet after taking only two tires to restart first, and Piquet was back up to second.

After racing went three and four-wide following the restart, Piquet reassumed the lead as his teammate Buescher lost several positions after suffering damage to one of his rear quarter panels. Among the drivers to get by Buescher were Sauter and his ThorSport teammate Matt Crafton in the No. 88. Buescher eventually fell outside the top-five and then out of the top-10,

Sauter moved into the lead with 48 laps to go and was leading the way when the race field began to cycle through green-flag pit stops with about 30 laps to go. Kligerman used pit strategy in the form of taking on two tires to cycle around to the lead with a margin of more than three seconds on Sauter. 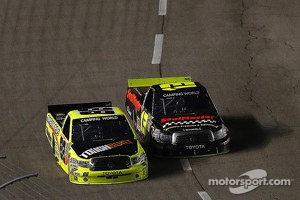 "I thought it was going to work out," Kligerman said of the call to take two. "I was flipping blowers, doing everything I could to hold him off."

Kligerman was unable to hold Sauter off, though, surrendering the lead with 11 to go. As Sauter pulled away, Kligerman was able to maintain his second spot.

After the race, Sauter said he knew before the race that he had a truck capable of winning. "The truck was good yesterday in practice," he said.

Despite dropping to the back of the field after having the hood up on his truck on pit road during the second caution of the race, Busch finished fourth. Ty Dillon finished fifth in the No. 3 Richard Childress Racing Chevrolet.

Dillon cut into Buescher's points lead with the top-five finish, whittling it from 21 to 15 points. Buescher wound up 11th, the final truck on the lead lap.

SS Green Light Racing off to the Lone Star State