Sauter kicks off 2013 with Daytona win

With a ThorSport Racing Toyota that was renumbered from 13 to 98 during the offseason, Johnny Sauter drove to his first NASCAR Camping World Truck Series win at Daytona (Fla.) International Speedway on Friday in the Nextera Energy Resources 250. It was the seventh-consecutive Daytona truck win for Toyota, and the 100th, overall, for the manufacturer.

"I'm just so proud of this team," Sauter said in victory lane.

Tonight, it was all about track position, and I thought we were in trouble.

Toyota also took runner-up honors, with Kyle Busch finishing second in the No. 51 Kyle Busch Motorsports Toyota while the field ran under yellow because of a multi-truck accident on the final lap.

"We would've had a really good race if it had been 100 laps, but it was 99," Busch said, frustrated by the caution flag that brought an end to the racing action.

Ron Hornaday was third in the No. 9 NTS Motorsports Chevrolet.

Ty Dillon dominated the first half of the race in the No. 3 Richard Childress Racing Chevrolet by claiming the top spot on lap six and staying up front until Sauter moved into the lead on a restart following a caution that came out for a wreck that involved more than 10 trucks on lap 54 of the 100-lap event.

"I screwed up," Brendan Gaughan, driver of the No. 62 Richard Childress Racing Chevrolet, said of the incident. "I got myself back there messing up on pit road. It was my fault, because I had a rookie on one side and another rookie on the other." 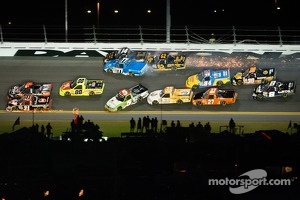 Sauter continued to run up front until Dillon moved back into the lead with 39 laps to go. Busch then moved into second.

Sauter's ThorSport teammate, Todd Bodine in the No. 13 Toyota, inherited the lead when he stayed out during a caution while others topped off their fuel tanks. But with about 25 laps to go, Busch got by Bodine for the top spot. Busch continued to lead, but the ThorSport teammates drafted their way back toward the front as a third teammate, Matt Crafton in the No. 88 ThorSport Racing Toyota fell off the pace and headed down pit road because of a tire issue.

"Tonight, it was all about track position, and I thought we were in trouble," Sauter said. "We were about 14th with 30 laps to go." 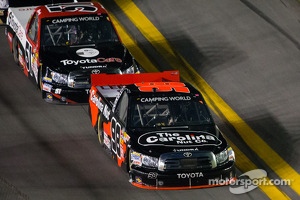 Sauter was able to hold his position, as Bodine got caught up in the middle and lost several positions. By the time the yellow and then checkered flags waved to end the race, Bodine made his way back up to 11th for the finish.

Lofton ready for new season to begin at Daytona