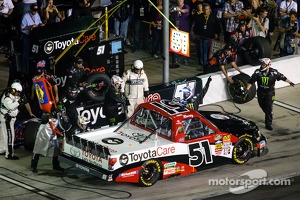 The National Dirt Late Model Hall of Famer will pilot the No. 51 ToyotaCare Tundra for Kyle Busch Motorsports (KBM) in the 150-lap event - spread across three segments - at the famed .500-mile clay oval, as NASCAR tackles dirt for the first time since Richard Petty's Grand National win at Raleigh, N.C. in 1970.

Bloomquist - who prepared for the highly-anticipated race by testing his No. 51 Tundra at Smoky Mountain Speedway in Maryville, Tenn. earlier this month - will look to add a Truck Series victory to his already accomplished resume at Eldora. The 49-year-old driver has a combined nine victories in the two crown-jewel events held annually at the Ohio dirt track, the Dirt Late Model Dream and the World 100.

Aptly named the "Dirtrax Dominator," Bloomquist has earned over 500 Dirt Late Model victories in over 1400 career starts. He is an eight-time National Touring Series champion, bringing home the hardware in the Hav-A-Tampa Dirt Racing Series four times (1994, 1995, 1998 and 200), the Lucas Oil Late Model Dirt Series twice (2009 and 2010), and once each in the World of Outlaws Late Model Series (2004) and Big Johnson Late Model Series (1998).

His best single season came in 1990, when he collected 38 wins across 61 events, including the World 100, the Jackson 100 and the UMP Summernationals Series championship - where he won 10 of the 14 events.

KBM owner Kyle Busch captured his first-ever Dirt Late Model win driving a Bloomquist Chassis in the 2012 Prelude to Dream at Eldora. Now, as the Truck Series takes to the same half-mile clay oval for the first time, Bloomquist will look to return the favor and get "Rowdy's" ToyotaCare Tundra to victory lane Wednesday night.

Scott Bloomquist, Driver of the No. 51 NCWTS Toyota Care Tundra:

What will it be like to drive in the NASCAR Camping World Series at Eldora? "It will be very exciting. It's going to be something different I'm sure, but it's a race car and I've driven a lot of race cars -- never a truck, but it's still a race car. Eldora is an exciting place -- we are going to win the race and I'm sure that we can do it."

How much different do you think the truck will drive on dirt compared to the late models? "You know, unlike our type of racing where you get there and have two laps of practice, we are going to get enough practice that we're going to be able to get this truck tuned to what we like and the fell that we are looking for.

I race so much different on dirt than a lot of the other guys -- we are always pretty straight. I prefer to run straight and that is the fastest way around Eldora anyways. So, I don't think it is going to be too big of an adjustment."

Kyle Busch, Owner of the No. 51 NCWTS Toyota Care Tundra:

You won the Prelude to the Dream in one of Scott's dirt late models. Do you think he can return the favor? "When NASCAR announced that the Truck Series was officially going to Eldora, we immediately contacted Scott about driving one of our Tundras -- he's won so many big races there and we feel like he gives our team a really good shot at winning this historic race.

Last year I was able to win the Prelude driving one of his late models, now it's time for Scott to return the favor and put our No. 51 Toyota Care Tundra in victory lane. This is a race that is kind of a wild card and it could play a big factor in the race for the owner's championship this season.

Erik did a really nice job last week at Iowa --- as he has each time he's been in the truck and helped us gain a little ground. Hopefully, Scott can have a strong run for us and we can keep cutting into the lead the 88 team has on us."

Rudy Fugle, Crew Chief of the No. 51 NCWTS ToyotaCare Tundra:

Do you think it will be an advantage having a dirt Late Model regular in your truck? "For sure knowing the track conditions is going to be the biggest advantage. Obviously, this is a different kind of an animal -- a heavier and clumsier vehicle than what Scott is used to, but knowing what the track is going to do and what it needs to feel like being a veteran at Eldora is going to be huge."

What did you learn at the test with Scott at Smoky Mountain Speedway? "We worked on a lot of shock packages and trying to get the tires to all work together. Again, with this being so much different than what we are used to and the setup is quite a bit different, getting the tires and what the tires want -- they are the only things that touch the ground, so you have to make them happy."

KBM-20: The No. 51 ToyotaCare Racing team will unload KBM-20, a Tundra originally built by the KBM chassis shop for another Toyota team but never raced. The truck was recently purchased by KBM and will make its first start in Wednesday's CarCash MudSummer Classic.