Shigeaki Hattori and Hattori Racing Enterprises beat the odds, found the sponsorship and prevailed against the best the NASCAR Camping World Truck Series has to offer. 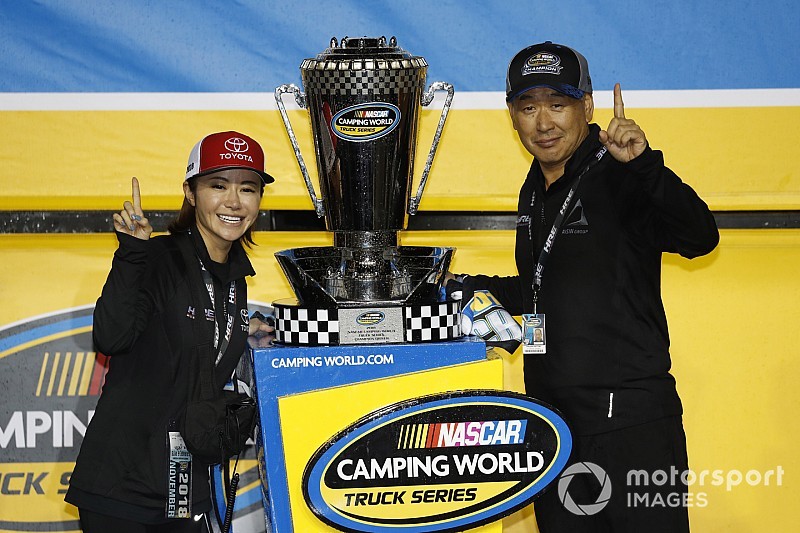 For a team that was never certain it was going to compete full-time this season, Hattori Racing Enterprises sure looked like a veteran organization on Friday night.

Moffitt was able to wrestle the lead away from Noah Gragson and went on to win the race and the 2018 championship with ease. It was also Moffitt and HRE’s sixth win of the season.

Hattori is no stranger to NASCAR competition, having fielded a team in the Trucks and K&N Pro Series for over a decade. In fact, he and Moffitt had a chance to win the K&N Pro Series East title in 2012 but had trouble in the final race at Rockingham Speedway.

“It takes a long time, since I started my own team,” said Hattori, a native of Okayama, Japan. “It was 2008. Brett and I missed the K&N championship in 2012, and we were leading the last lap, but then we missed it. But (Friday) we did it.”

Hattori has spent all season working on securing sponsorship while Moffitt continued to excel on the track. Several times the team did not know if it would compete in the next race only to secure funding at the last minute to keep the team competing.

“We wouldn’t be here without our sponsors’ support. AISIN Group has been a big supporter of ours, along with Toyota and TRD. So many others have been a part of Brett’s and the team’s success this year. Hopefully we can continue to build on that,” Hattori said.

Despite the race not being televised in Japan, Hattori was busy answering text messages and emails from his home country after the race.

“Well, as soon as we finished the race today, I got maybe 20 text messages and phone calls,” said Hattori. “The president of AISIN, and chairman, they called. It's not broadcast over in Japan, but they are checking maybe the website, and yeah, scoring. And they are so excited.”

Winning at Homestead-Miami Speedway is nothing new to Hattori who himself won at the track as a driver while competing in the Indy Lights division 20 years ago.

“Today, we did it. Again, we are a small team, but everybody did a great job. I am so happy for the whole team, the team members and the team’s families,” he said.

“This place, I have good memories. The last 10 laps, I was thinking same as when I won here in Indy Lights. This place is so great. I have such good memories.”

Despite the struggles financially, Hattori proved a small team can have success as his shop with just 10 full-time employees will now celebrate their championship.

“Definitely the money part is a big part of car racing, but it's not only money, and even if we spend $10 million - if we spend the wrong part and it doesn't happen, I think this sport is definitely a people sport,” said Hattori.

“We have a good small group. We have good people and good team manager and good crew chief and good driver and good mechanics. All one package, I think. Today our hard work paid off.

“But we did it. Again, we are a small team, but everybody did a great job. I am so happy for the whole team, the team members and the team’s families.”