Stock cars (trucks) on dirt? My hat is off to you NASCAR!

It was announced last year that the Camping World Truck Series would make its debut at Eldora Speedway, and that day is now upon us. With my musings yesterday about the monotony of the Brickyard 400, the event slated for this evening is a tiny gleam of hope that NASCAR can move in the right direction.

Last night, SPEED aired the practice sessions live and upon first glance I was flabbergasted. I thought I was seeing things. I don't know if it was the incredible competition happening in just a practice session, or seeing drivers taming a track, instead of teams spending their way to the front of the pack. 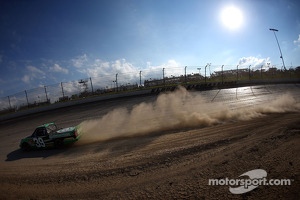 Case in point? Nationwide races at Mexico, and Montreal. These events showed the world that not only can the ranks of NASCAR travel great lengths to show their product to different folks in different countries, but be outrageously entertaining too. If I am not mistaken, the Nationwide races at Circuit de Gilles Villenueve have been over the top exciting. That track always creates great racing. But no follow up.

The Sprint Cup Series continues to keep to its cookie cutter tracks, and single lane highways of the Indianapolis Motor Speedway.

Even Mexico. Autodromo Hermanos Rodriguez, I think that was the venue. I recall a younger Carl Edwards getting nearly airborne down the main straight trying to make as much time through the chicane as possible, or the long carousel like final turn giving drivers a chance to pass for position, or even a win. Again, send the Nationwide guys, but don't follow up with the big show. 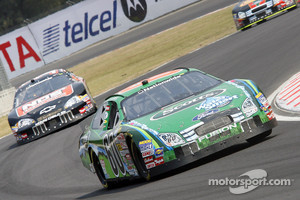 NASCAR's tradition, if that is what apparently has half of the fans saying stock cars are only to be raced on ovals, is long steeped in dirt tracks. Sure, its been something like 43 years since they raced on dirt, but if I could have been so interested in a practice session, then there must be more fans completely in love with the Trucks at Eldora.

I will withdraw some of my potential solutions from yesterdays article. I will pose a new one.

Two dirt races in the NASCAR Sprint Cup Series schedule in 2014. I feel this is completely feasible. I think the teams would actually welcome it. Costs could drop significantly. While the cars have to be slightly modified for the dirt tracks (no splitter, belly pans, mesh for grills) I think that outfitting one or two cars to head to a pair of races would indeed be cheaper than sending two cars to a paved 1.5 mile clone. Stresses on engines should be lower as well. Institute a one engine (one backup) rule for the cars to ensure no shenanigans in the money department.

Dirt racing puts the power back in the drivers hands. Plenty of current NASCAR Sprint Cup drivers came from the Saturday night dirt track racing ranks, and I bet there would be plenty of support for the idea.

Lets examine what next years schedule could look like, if I was given the power to (hopefully) make the people happy. I am using this year's schedule as an example.

The first Pocono snooze-fest should be removed. It is the 14th race of the season. Make that event the first visit to a dirt track. Eldora should be on tap for that event. Just wait, this gets better. 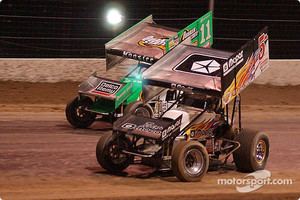 The next change would be to remove the second Michigan race from the schedule. Again, a big 2-mile track that, arguably, is a Hendrick/Rough/Penske race could easily be kicked to the curb. Make this the second dirt track visit...How about Knoxville? One week after the big World of Outlaw Nationals...seems like a great idea to me. Just imagine the number of people still on a high from the Outlaw show...

Make these events three day shows. All practicing goes down on the first day, a Thursday, or a Friday, then go with broadcasting two 25 lap qualifying heats ahead of the support Truck race the following day. Then show the 100 lap showdown on Saturday night under the lights, or Sunday afternoon.

In continuing my story from yesterday, here are my other replacements for the cup schedule.

Indianapolis gets removed from the schedule and replaced with that little track down the road...O'Reilly Raceway Park spent years sucking me into my television with the Trucks and Busch...errr....Nationwide cars. That track deserves a Cup show. Sure it's small, and the seating isn't really enough to make the NASCAR bank accounts happy, but some backstretch temporary bleacher could help out. 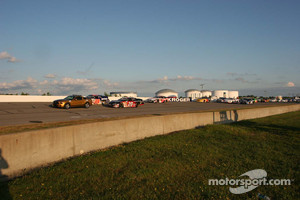 Lastly, for my views on getting a road course race into the chase, this is what you do. Loudon, the second race of the chase gets replaced with Road America. For one, if any of this were to come true the NASCAR brass wouldn't want the road course race to be too close to the end of the chase, cause that could really skew the standings. Not to mention, could you imagine how beautiful Road American would be at that time of year. Fall colours on the trees, cooler temperatures giving cars more grip. Seems fun to me.

I will end my rant there. I am ready for the applause and criticisms of the world. I would like to tip my hat to NASCAR for bringing the trucks to Eldora. I will be pasted to my television tonight, and I hope you all will too. Hopefully someone at NASCAR is listening, cause I think these plans could make a lot of fans happy!