This marks the first victory for ThorSport Racing since joining Toyota at the beginning of the 2012 season and fifth career triumph by Sauter in the series. 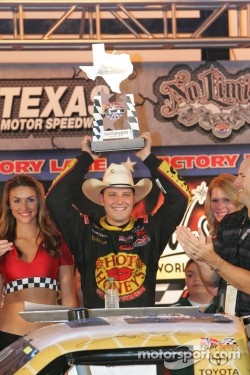 Sauter's victory is also the 10th by Tundra drivers at Texas. Other winners include six by Todd Bodine, two by Kyle Busch and one by Ted Musgrave.

Fellow Tundra driver and ThorSport Racing teammate Matt Crafton finished second in the 167 lap race at the 1.5- mile. It was the second ever one-two finish for the long standing NCWTS team.

JOHNNY SAUTER, No. 13 Hot Honeys/Curb Records Toyota Tundra, ThorSport Racing Finishing Position: 1st How were you able to drive your Tundra to a Texas victory? "This is unbelievable. The year that we've had with the bad luck and to come here in the fashion that we had, I wasn't exactly sure what was going on in that restart deal there. We were fourth and then they said we were third. The outside groove is the preferred groove on the restarts. Can't thank Joe Shear (crew chief) and all these guys enough. This is big. A wise man once told me do all to the honor and glory of god and that's what we did today."

Do you feel redemption for finally getting your Texas victory? "There's no sweeter vindication than -- last year was really tough to swallow. Had the dominant truck and to come down to a late race restart like that and to, whatever -- rules are rules and I broke a rule. That was tough to swallow. To come out here this year and for qualifying to get rained out and the season that we've had up 'til this point, it's been bad luck after bad luck. To start the race in 20th and to ultimately be able to drive to the lead and overcome some obstacles tonight, I couldn't be prouder of Joe (Shear, crew chief) and all the guys at ThorSport. I have to thank Hot Honeys, Curb Records and Toyota - ever body that's a part of this. The driver is only a small part of the equation and that truck tonight could pretty much drive itself."

Why have you been able to run so well at Texas? "Setups, I've come here and been humbled when I left and ran so bad. It's just a great race track, great atmosphere, great fans especially. My grandma lives 20 miles down the road in Dallas and I get an opportunity to go there and have chicken and dumplings every year, homemade nonetheless. It's cool. It's like a relaxing feeling to be able to hangout and do those things. This race track has a lot of curveballs as far as grooves and bumps. It just has a lot of unique characteristics. It really puts an emphasis on handling and it doesn't ever hurt to have a Triad motor under the hood. We just hit the setup right. Joe (Shear, crew chief) did a great job. Right off the truck yesterday we were top of the board, so I knew we were going to have something we could race pretty hard with today. We passed a million trucks it seemed like tonight to get where we were going. We definitely had the dominant truck and it's nice to see the dominant truck win the race."

How much pressure do you feel during these races? "I'm cool as a cucumber if anybody has ever listened to me. No, I've said it before and I'll say it again, I'm competitive to a fault. I get a little bit too wound up and when things don't go right, you just try to keep your composure. The way this season has gone, it's been a very trying year -- it's probably the toughest start to a season I've ever had. It's just trying to keep everything in perspective. It sounds crazy, but having kids really helps you keep things in perspective. Having said that, it was hard and I got wound up there with about 35 laps to go. Joe (Shear, crew chief) told me to shut up and after that I never said another word on the radio the rest of the night and just did what we had to do to win the race."

JOE SHEAR, crew chief, No. 13 Hot Honeys/Curb Records Toyota Tundra, ThorSport Racing Did ThorSport Racing pick up momentum with a win and second-place finish? "Of course, anytime you can get a win with a team and then finish as good as we did with one and two, it just goes to show the equipment and the people we have working -- all the way from the owner to the people that work at the shop and how hard they work. It's a lot better this year. We're starting to work more together and we come here with Toyota and Toyota's support and what we do at ThorSport and come out of here with a one-two -- I'm proud of all the guys."

MATT CRAFTON, No. 88 Menards Toyota Tundra, ThorSport Racing Finishing Position: 2nd Did you free your Tundra up too much on that last pit stop? "It was a bit too much. I screamed a little bit tight on the run before that on that real long run, we got a little bit too tight and went up a little bit on the right rear air pressure. That was a little bit too much. Getting clean air and we fired off right there (Johnny Sauter) got up behind me and I was sideways loose. In the middle part I turned off all my blowers trying to get the right front to come up and I finally burned the right rear up trying to catch Johnny. About four laps into it, if they were telling me the lap times I was and I think Johnny was getting a little bit bigger for a minute coming to me and then the right rear was done. All in all, the ThorSport organization is awesome -- the Menards Toyota Tundra was awesome. All I have to say is we finally proved you wrong Duke."

What were the final laps of the race like for you? "It really just (upsets) me to be second three times and not have a win here because we've been so good. Tonight Johnny (Sauter) was the class of the field. His Tundra was really good. We fired off right there and made small air pressure adjustment on that last run because I was just a little bit too tight in traffic running fourth or fifth, wherever we were at that point. We made that adjustment in the right rear and we got the lead and wow, she was really, really loose right there. It's amazing what clean air does for you. All in all, great for ThorSport, the whole organization. Everybody counted us out for switching manufacturers and that's all we heard was, 'You guys are stupid for switching' because we were running so good last year. We're back now."

JASON LEFFLER, No. 18 Dollar General Toyota Tundra, Kyle Busch Motorsports Finishing Position: 6th How was your night in Texas? "It was a tough night. This Tundra didn't feel like it did yesterday in practice. It was a good battle and we battled hard. We ended up sixth after running fifth. We put ourselves in position that if we had enough speed, we probably had a chance to be top-three, but it just didn't work out. Just have to thank everyone involved. At Dollar General you can get 10 percent off because we got a top-10, hopefully next time it will be 20 percent when we win. Also thank Toyota, TRD and all the guys working hard on our KBM (Kyle Busch Motorsports) Tundra.

DAKODA ARMSTRONG, No. 98 EverFi.com Toyota Tundra, ThorSport Racing Finishing Position: 18th How was your race? "We never could get our EverFi Tundra to grip the track. I was snapping loose for most of the night and just couldn't get going on restarts. I felt a tire going down about midway and that didn't help us either. Dan Stillman (crew chief) and the crew never stopped working on it, but we'll have to make some changes at the shop over the next two weeks before Kentucky."

Sauter claims first win of the season at Texas