Burton will race ThorSport's No. 13 Toyotas in two events a week apart during Speedweeks 2014, Feb. 13-23, at Daytona International Speedway.

Jeb Burton, one of the most promising young drivers on the NASCAR horizon, has signed with ThorSport Racing to open the 2014 NASCAR Camping World Truck Series and ARCA Racing Series presented by Menards seasons.

Burton, 21, the son of 2002 Daytona 500 winner Ward Burton and the fifth-place finisher in the 2013 Truck Series championship, will race ThorSport's No. 13 Toyotas in two events a week apart during Speedweeks 2014, Feb. 13-23, at Daytona International Speedway. 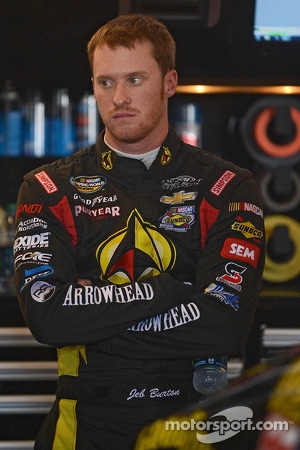 The balance of Burton's 2014 program will be determined, in part by gaining additional sponsorship.

"The opportunity to come to ThorSport is a big deal for me, my career and my family," said Burton, who joins an organization that won 2013 championships in both NASCAR and ARCA. "It's an honor to me that Duke and Rhonda Thorson would make the call to put me in their vehicles -- the best there is in both series.

"Mr. Thorson has proven his commitment to the Truck Series -- he's a racer, that's what it's all about and it feels good to be here. I feel like it's a place where I can race, and win for many years."

Burton joins a driver lineup that includes 2013 Truck Series champion Matt Crafton and Johnny Sauter, who finished fourth in the championship, one point ahead of Burton.

"Having Jeb join the ThorSport family, without question, gives us the strongest driver lineup in the Camping World Truck Series and a talented young man that gives us an opportunity to win another championship," ThorSport vice president of corporate partnerships Matt LaNeve said. "We are actively seeking sponsorship and feel like his team, and our organization have a lot of value to any potential partner."

Burton has an impressive record in his first 27 Truck Series races -- a five-race schedule in 2012 and the full slate in 2013. He won the 2013 Keystone Light season-long pole award with seven poles -- including his first in his seventh career start.

Burton completed 99.4 percent of the laps he attempted in 2013. Burton won his first Truck Series race in his 12th career start, in June 2013 at Texas Motor Speedway. Last season he also made his NASCAR Nationwide Series debut with an eighth-place finish at Kentucky Speedway.

"I can't tell you how great it is to get this deal done in a very short amount of time," ThorSport team manager David Pepper said. "This gives us a great driver that can win both the Truck and ARCA races over the next couple weeks.

"We've had our eyes on Jeb the last few years and one thing that really stands out is how well he gets along with Matt and Johnny and the respect they have for each other. To have the opportunity to get Jeb into our ThorSport family of drivers is a great move for both parties."

Burton's first race with ThorSport, the Saturday, Feb. 15 Lucas Oil 200 presented by MAVTV American Real, will be driving a Toyota Camry for the team that won the 2013 ARCA drivers' and owners' championships and was a large part of Toyota winning last season's ARCA manufacturers' title, its first in that series.

The following week, Burton will jump into the No. 13 Carolina Nut Co. Toyota Tundra that pushed Sauter to the win and Crafton to ninth place before it finished 11th driven by Todd Bodine in the 2013 NextEra Energy Resources 250, which is scheduled on Friday, Feb. 21.

Roundtable: Are there too many rules in NASCAR?

Roundtable: Are there too many rules in NASCAR?