The NASCAR Camping World Truck Series was the first NASCAR national series to test out the somewhat revamped racing surface at Bristol (Ten.) Motor Speedway on Wednesday night with the running of the UNOH 200. Timothy Peters put on a dominating performance in the No. 17 Red Horse Racing Toyota.

"What an awesome feeling," Peters said in victory lane.

Peters dominated as much as the event could possibly be dominated, leading every lap of the race that went past its 200-lap scheduled distance with a green-white-checkered finish. His Red Horse Racing teammate Parker Kligerman finished second in the No. 7 Toyota, and Ross Chastain was third in the No. 08 SS Green Light Racing Chevrolet.

What an awesome feeling.

The win was Peters’ second of the season, allowing him to join James Buescher, driver of the No. 31 Turner Motorsports Chevrolet as the only two multi-race winners on the year.

"I just thank the Lord for being with me and letting me win two in one year," Peters said.

While the race went green and caution-free more than one-third of the way, the yellow flag wound up waving six times, with the sixth and final caution coming just after the fifth caution period ended and creating the need for a green-white-checker attempt to finish the race under green.

Brad Keselowski raced second to Peters much of the second half of the race in his No. 29 Brad Keselowski Racing Ram, but he ran out of gas on the final restart and, as a result, headed down pit road as the rest of the field took the green for the final time.

"I just kept running out of gas," Keselowski said of having difficulty on the last couple of restarts. 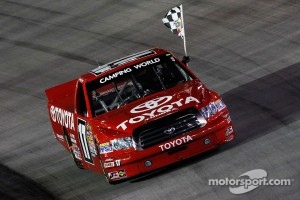 Ty Dillon also ran out of fuel on the final restart in the No. 3 Richard Childress Racing Chevrolet. Peters and Dillon headed into the race tied for the series points lead, but with the win, Peters moved out to a 17-point lead over Buescher who moved passed Dillon to take the second spot. Buescher finished the race seventh.

Joey Coulter finished fourth in the No. 22 Richard Childress Racing Chevrolet, and his RCR teammate Brendan Gaughan was fifth in the No. 2 Chevrolet.

After sitting on the pole, Gale ran in the top-five for much of the race, until he was involved in two cautions. He made contact with Todd Bodine's No. 11 Red Horse Racing Toyota with 41 laps to go, cutting down a tire on Bodine's truck and sending him into a spin.

"The 33 got up under us and just pushed," Bodine said. "That was racing. That was close racing."

Gale then wrecked to bring out the final caution of the race.