Towing the Endeavour: Todd Bodine will head to the 2012 NASCAR Camping World Truck Series season finale at Homestead-Miami Speedway on Friday, November 16, with a new paint scheme covering his No. 11 Toyota Tundra.

The two-time champion will continue his long-standing relationship with Toyota by representing the Tundra Endeavour Project, an event that showcased the power of the 2012 Tundra Crewmax pickup when it towed the space shuttle "Endeavour". 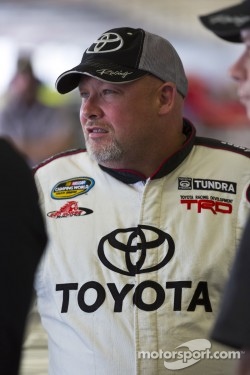 The Tundra towed the 292,000-pound shuttle and its custom tow dolly across a Los Angeles freeway bridge en route to the California Science Center, where it was placed on permanent display on October 12, 2012.

"Toyota has stood behind me for such a long time and it's an amazing manufacturer to drive for," Bodine explained. "I've been fortunate to drive fast Tundras for the past nine years and win two championships with them, and I'm proud to be a Toyota driver.

When I visited the Endeavour in 1995, I was given the opportunity to sit in the cockpit of the shuttle, which is a very special and extremely rare privilege.

So when we were approached with the chance to represent this project at Red Horse Racing, we gladly accepted the opportunity. It'll be a great way to have some fun and close out this season.

"It's really amazing that a stock Toyota Tundra was able to tow the Endeavour; it just shows how tough these trucks are. As the full-sized pickup truck with the highest North American parts content, I think the Tundra was a clear choice to pull this American icon to its final home."

A previous winner at the Arizona track, two-time series champion Todd Bodine and his No. 11 Toyota Care Team were optimistic for a strong run with experience on their side.

The new pavement created a challenge for the entire field and produced an incident between Bodine and another competitor in the early stages of the night, resulting in a 28th place finish.