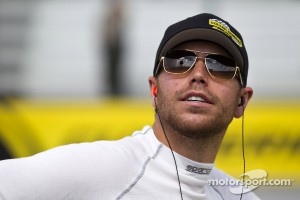 Scott started from the third position and led 48 laps (of 153) over three race segments to capture his second career Truck Series win.

Scott's triumph was the second victory in 2012 by Kyle Busch Motorsports (KBM), and also marked the first win by a non, full-time NASCAR Sprint Cup Series driver for KBM.

How does it feel to capture your second Truck Series win? "It's great. This means a lot to get Dollar General to victory lane -- that's been with me all year. I told Rick Dreiling, the CEO of Dollar General, that I was going to get him to victory lane and I was going to get him some trophies and I'm glad I could deliver. Just thanks to everybody. Thanks to Kyle and Samantha (Busch) for letting me run their truck. This is awesome. Isn't this cool? It means a lot to win at Phoenix. This is pretty much a home race for me from Idaho. It's just surreal. It's awesome."

What happened on the last restart? "Well I learned. I learned a lot. You know, I was on the inside for most of my leading and Ty Dillon was able to get me on the outside. I just paid attention to what he did. I knew I kind of had to save it a little bit so I could have a shot at it. When the caution came out with two to go, I knew that was the only way I had a chance at winning this, so I was ecstatic. I was happy. I started cooling everything down. Held him tight. Hope he didn't come up and get into me and beat him. Kyle Larson -- what a talent. I haven't even seen him around really. And, then he's up there and he's challenging for the win and leading this thing. He's going to win a lot of races. Thanks to him and his team for racing me clean and not getting into me. He's going to have a lot of success and it's fun to race people like that."

What does the future hold? "Well, obviously it means a lot. Unfortunately, I'm not going to be back with Joe Gibbs Racing and Dollar General in the Nationwide Series. That breaks my heart. It does a lot for me going forward and I can't wait for next season."

How were you able to make the pass for the win? "Actually, I probably should give a dozen roses or something to Ty Dillon, because he was able to get by me on a restart earlier by holding me down and driving in deep to the corner and just keeping position on me and I learned from it. I lost the lead earlier and luckily was able to come back and I was able to have opportunity to do the same thing to somebody else (Kyle Larson), somebody that probably wasn't expecting it. Kyle Larson, he's going to win a lot of races. That kid's very talented and, unfortunately for him , the caution came out with two to go. Fortunately for us, I was able to apply something I learned earlier in the race, hold him down. I just went into the corner really hard and held him down, got him a little loose and didn't let up. And, when I saw him get loose, I let my truck unwind and get off the corner strong and then sailed it off into (turn) three right there with Jesus and drove away."

What does it mean to have the second most wins (27) in Nationwide Series history? "I think it's a big deal. It's probably something after you're done in this business and other people look at it, it's probably a bigger deal. It's probably a bigger deal to Rick (Ren, KBM general manager and all-time NNS wins leader with 28 victories as a crew chief) than it is me. I've got a few years on him yet -- I keep telling him that age is on my side, so it's just time before we get past him. They did a great job at Martinsville winning with Denny (Hamlin), so I'm back one behind him again. We go to Homestead next week, got the boss (Kyle Busch) back in it with Dollar General again, so hopefully -- we've been really strong this last half of the year, just things haven't went our way and tonight they did."

How was tonight's race? "Crazy. Just glad we finished. Big points night. S till disappointing -- I know we had a better truck than that. These last set of tires -- I know it seems like a cliché from Martinsville and wherever we were at before that. Man, it's bittersweet. Good Tundra all day. They guys worked their butts off, but I wanted to win."

What were you thinking as the points leaders had 'issues' tonight? "I had my problems. It was time for somebody to have theirs."

What's your mindset going into Homestead-Miami Speedway? "Nothing but win."

Do you feel like you have a shot at the championship? "It's like I said before the race, mathematically we were in, but we needed a legitimate shot. Butch Hylton (crew chief) made a great call there at the end and now we have a shot going into Homestead and that's all we can ask for. I'm telling you -- and I'm sure I'm not the only one with a tire problem -- but that last set of Wranglers on our Tundra -- man, it just wouldn't do anything. Had to get my thoughts together there afterwards, because I want to win. It feels good to be in this position. We've got a shot. That's all we can ask for."

What forced you behind the wall for repairs? "I was sitting there really just biding my time just waiting for the right opportunity on these restarts and the 7 (Parker Kligerman) got loose underneath somebody and I was in the wrong place at the wrong time."

What happened in that accident? "I want to apologize first of all. I did not want to wreck anybody here. I'm learning. I think I braked too late and he brake too early and that's what took us out there. I just saw the replay and I could not avoid him. I tried. I'm very disappointed for my sponsorship -- for Net10 Wireless -- they have been supporting me for these four races. We'll catch up next time"

What did Brendan Gaughan say to you after the accident? "I was saying just calm down. I apologized. That was not what I meant. I'm not here to wreck anybody. I'm here to make friends and I'm here to compete. We were doing great at first, so sorry for KBM (Kyle Busch Motorsports). They gave me a great truck this night. I'm very disappointed for myself."

What put you out of the race? "I'm not exactly sure. I don't know what the replay is, but I'm pretty confident I know. Everybody thinks we need to go racing on dirt -- we can't even race on asphalt. Whatever -- just very disappointing. Our SealMaster/Curb Records Toyota was pretty fast. We just were working on trying to get track position. When it spread out there, we could run just as fast as the leader -- if not faster. I felt like we had a truck that was capable of winning tonight. Unfortunately, it's on the hook. Just the way this year has gone. We'll go to Homestead and take care of business."

Do you know what happened? "I'm not sure. We just got run into getting down into turn three there. Bad night for our SealMaster/Curb Records Toyota. Felt like we had a great truck. Just needed a little bit of track position. We had speed. And, I don't know, so disappointing. It's just amazing to me that some guys are here racing and they just can't keep their vehicles under control. You just see it -- they just keep crashing and crashing and crashing. I guess if that's what everybody likes, that's what they are going to get."

How close were you to saving the truck? "Well, looking at the replay it's not very impressive, is it? You don't want to just get loose and go to the wall. That's not very good driving. We were just really loose in our No. 7 Toyota Tundra -- really loose all night, just flipping blowers like crazy trying to heat up different tires and tighten it up. On that restart -- I had an early restart and it was just fine, but I guess with the 29 (Ryan Blaney) going around us a little bit just maybe not having a little air there -- sucked around. But, hey, there's no blame but myself right there. At the end of the day, if you're in that position you spin it down to the inside. You don't try to catch it, so it's alright. We'll go to Homestead with a brand new truck and now we've got one thing to do -- just win, right?"

How did the accident occur? "I just said, it was not very impressive driving by myself. We've been loose throughout the race, just flipping blowers like crazy and had a little bit of a brake issue -- just trying to tighten up the truck any way we could. I told them, 'Hey, let's just get track position here. We'll take two tires, go for it,' and we got up front. And, I had that earlier restart where I did just the same thing and it was fine. That time around, for whatever reason it just wanted to go around. When you're in that position, you've got to want to turn left and just spin it out, but I tried to save it thinking I could and there was no way of doing it, so we know it's in the wall."

How did you end up wrecked? "He (Jason White) just couldn't get it saved and collected back together and he come across the track and hit me down the right side which pushed me into the inside side wall and got the left side, so our Toyota Care Tundra is tore up on both sides. It's a crying shame that we have to race on a surface like this. One groove, you can't get out of it by a foot and then you've got guys who just won't give any and then you have problems. It's pathetic. It's a shame that we've got to race on this surface. They need to do something a little better than this. It's the story of our year. We just can't get a break."

Peters maintains second in the points after Phoenix 150

Roundtable: Is All-Star win a turning point for Kyle Larson?