Tundra drivers total 12 victories in 2013 with one race remaining at Homestead-Miami.

Toyota regains the series' top manufacturer position after previously winning a record five straight NCWTS manufacturer's championships from 2006 to 2010. Overall, this is the ninth time Toyota has earned a NASCAR manufacturer's title since the start of the 2004 season.

In addition, Tundra racers collected three driver's championships with Todd Bodine claiming a pair of titles (2006 and 2010) and Johnny Benson winning the 2008 trophy. Tundra driver Matt Crafton currently leads the NCWTS standings by 46 points and only needs to start next week's race at Homestead-Miami Speedway to claim his first career NCWTS championship.

Three teams fielding Tundras -- Kyle Busch Motorsports, Red Horse Racing and ThorSport Racing -- all contributed to the NCWTS manufacturer's title. This season, Tundra drivers have combined for 12 wins, five pole positions, 42 top-five results and 88 top-10 finishes with one race remaining on the 2013 schedule. In addition, Toyota drivers have led 1,278 laps (of 3,243) in NCWTS competition this season -- almost 40 percent of the total laps.

"Everyone at Toyota and TRD are extremely proud of earning another manufacturer's championship and it demonstrates our company's continued commitment to the NASCAR Camping World Truck Series," said Les Unger, Toyota's national motorsports manager. "We've been extremely fortunate to partner with championship-caliber teams and exceptionally talented drivers that enable our Tundras to prove their excellence on the race track."

Highlights from the season include ThorSport Racing driver Johnny Sauter starting the year by winning the first two races on the schedule (Daytona and Martinsville), and then earning a sweep of the superspeedway races when he was victorious at Talladega. Darrell Wallace Jr. and his Kyle Busch Motorsports (KBM) Tundra made NASCAR history with his first career series victory at Martinsville Speedway -- becoming only the second African-American to win a NASCAR national series race. Jones' Phoenix victory in a KBM Tundra enabled him to become the youngest winner in series history. Other Tundra drivers with victories during the season included Kyle Busch (four wins), Timothy Peters (two wins) and points-leader Crafton (one win). 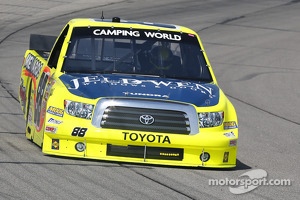 "It's an honor to be associated with Toyota and TRD, and be a part of their sixth manufacturer's championship," says Crafton. "Since ThorSport Racing started fielding Tundras last year, we've formed a great partnership and constantly work together to improve our on-track performance."

A total of 33 different drivers have participated in the Camping World Truck Series in Tundras this year, including seven -- Joey Coulter, Crafton, Peters, German Quiroga, Sauter, John Wes Townley and Wallace -- who have competed in all 21 events driving Toyotas.

Since joining NCWTS competition in 2004, Toyota has won 111 races and captured 91 poles in 242 races. Busch (28) has the most victories driving a Tundra.

Jones is wide awake and dreaming