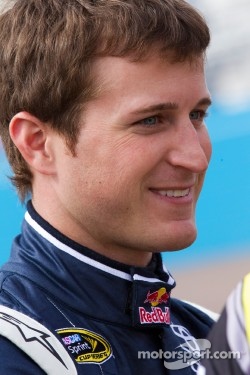 • The win also marked the Enumclaw, Wash.-native’s first win in a Tundra and third in the NCWTS in four starts.

Was winning the only goal for this weekend? “I came here this weekend wanting to win -- that was the plan. This is a tough series. These guys do an awesome job and that restart there with Todd (Bodine) -- our truck was really good once I could get rolling. He tried to get me all the way up to the wall and I think he got himself loose by trying to squish me into the wall. We had a good run down the back and some good laps after that. It was a solid run. I have to thank Kyle Busch for letting me drive this thing and this whole team. The guys do such a good job and it was a lot of fun driving for them and working with Eric (Phillips, crew chief) and Rick Ren (general manager) and all the guys. Everybody at Toyota, Flexico, Team ASE, M&M’s, Triad, Camping World, all the fans -- what a great crowd here tonight at Darlington. This is one of my favorite race tracks and I’m really glad I came.”

How was your race tonight? “The crowd here was great tonight. It was a lot of fun to race in front of such a good crowd. I love Darlington -- this is an awesome race track. This Toyota Tundra was really fast all night long. Just to be in the right spot at the right time and keeping that track position. This whole team on pit road did an awesome job. We had the track position all night and just holding off Todd (Bodine) and everybody else behind him, it was quite the battle there. It was a great run.”

How tough was the battle on the final restart? “I actually had a little more off of two -- it was in the middle of one and two up by the wall, I was rubbing the right side with the top of our truck. We had just enough room that we were able to hold on and get down the backstretch better than anyone else and just kind of drive off from there.”

What happened on the final restart? “I actually spun the tires a little and I short-shifted to third and that gave Todd (Bodine) just a little bit of a run on me there, so I gave him back that inside. From there I just had to stay in it and keep the momentum off of turn two. We were able to do that and kind of drive away after that. It was close through one and two. It was a good finish there. This is a great race track, great race team and I’m glad I was able to come here this off weekend and have a lot of fun driving the truck.”

ERIC PHILLIPS, crew chief, No. 18 Toyota Tundra, Kyle Busch Motorsports How much confidence did you have with Kasey Kahne driving for you tonight? “We knew Kasey (Kahne) could get the job done. We came really close at Pocono last year when he drove. We came the same way we do every week or when Kyle’s (Busch, team owner) in the truck. This truck is one that Kyle won four races in last year and Kasey run second. The guys did a great job preparing the truck -- they do every week. They had good pit stops tonight and we had a solid race.”

Who is easier to deal with in truck races -- Kasey Kahne or Kyle Busch? “They’re both. Kasey (Kahne) is obviously no problem. He’s great to work with. I have no issues with Kyle (Busch, team owner). Everybody asks me that, every week and I think every time I meet somebody new. I can’t tell you when Kyle has ever said a cross word to me on the radio, in person -- he’s been a pleasure to work for the last year. I enjoy doing it. He demands a lot of focus and effort from us, but that’s what he gives you so there’s no problem there. The same way with Kasey. These guys that drive these Cup cars every week -- week in and week out -- they expect to show up to the race track and be good when you unload, be fast and be prepared and as long as you are, they’re easy to work with.”

Did you give Kasey Kahne any advice for the final restart? “If there’s a situation that brings itself up that you need to advise him about who he’s racing with or something that they’re 1going to do or stuff that is more specific to truck racing. I talked to Kole (Kahne), his spotter after practice this morning about kind of the way we’ve seen the restarts go here for the truck race last fall and it always kind of plays out that way. You try to give that truck information that is maybe a little different than the Cup cars. Talking to Kole, the way you restart here is a little different between the two because you can just run wide open through one and two. That is about it. Todd (Bodine) and (Ron) Hornaday -- you know they’re going to race you hard. They’re truck guys and that’s what truck guys do. I didn’t say anything to him there. I let him know who was around him and that’s about it.”

What was the race between you and Ron Hornaday like in the final laps? “We knew Kasey (Kahne) was going to be tough and we both spun the heck out of the tires. I got mine hooked up first and beat him into one, but didn’t quite clear him enough to make it work. These trucks are so aero dependent -- when he was off my right rear quarter panel, I don’t know how I didn’t wreck. Ron (Hornaday) being right there -- he took advantage. He did what a veteran would do -- hang back that little bit and get that run to get underneath us. Didn’t quite get him cleared here. It was a handful. It was a great race. I am so happy for Darlington Raceway -- look at the crowd we got. This tells you what the Truck Series is about. These fans are hardcore, they came out here on a Saturday night just to watch trucks race. Everybody at home -- we appreciate you watching. Trucks are the greatest race and I’m loving it. We didn’t want third. Second would have been better, but we’re back.”

How was your truck handling in tonight’s race? “The truck was good. Unfortunate right there at the start, don’t really know what happened at the start of the race with the left front tire, but it was vibrating really bad so we elected to come in and change it. Had to start in the rear basically. Had a great truck. It did everything I needed it to do. That was a lot of fun racing like that. It was Darlington and she’s back -- she’s tough underneath.”

What are you looking for in the final restart with so few laps remaining? “When you have a situation like that and the position I was in, running second, you want to win and you want to pass him. That’s what we’re all here for, but the way our season has been going, we had to get to the checkered flag. I gave it a shot and got sucked around, got loose and all that so we finished third. The main thing was just don’t wreck -- just don’t cause a wreck, don’t do something dumb. We’re all here being professionals trying to race and put on a show. We did and it was another great show in the Truck Series as usual. If you remember what I said earlier about the veterans and what’s going to happen at the end -- we were right there, the guys I said. Kasey (Kahne), Elliott (Sadler), Ron (Hornaday) and me. That’s typical Darlington. All in all I think the kids did a pretty good job. The guys that didn’t have the experience. They had some problems and they’re going to -- that’s Darlington, but I’m pretty proud of the way the kids did tonight.”

Did Butch Hylton (crew chief) save your race by giving you fresh tires on the final pit stop? “He did. He did a great job calling the race all day. We really didn't a great truck from the time go. But all in all, this is what we need to have a good points day. At the end of the day, we still brought home a top-10, and we're going to work on it. We’ve got our momentum going, and what better place to take our GearWrench Tundra than to Martinsville. All in all, what started as a bad day turned into a great day.”

What happened in the first accident on lap one of the race? “I didn’t expect that, for sure. David (Starr) is a very experienced driver. He went straight to my door, and then I hit the wall and turned sideways. Then, everything starts. It’s hard when you get caught up in a wreck early in a race, but when it’s the first corner, it’s more frustrating. We had an awesome Toyota Tundra today before the race, and I knew I could be at least a top-10 tonight. But we have to pick up the points, learn about it, and go to Martinsville.”

Are you okay following the accident that took you out of the race? “Yeah, it just stinks because we had a really good truck. We finally got our lap back and the guys were working really hard from practice. We came a long way. It just stinks. Hopefully we can get that truck ready for Nashville and have as good of a run as we almost had at Darlington.”

What happened that took you out of the race? “I got on the inside of the 1 (Jeffrey Earnhardt) truck and we were going through the middle of one and two running fine coming off of two then he started crowding me a little bit. I got my lefts (tires) on the apron down there and just lost control of it. Unfortunately for the Wounded Warrior Toyota Tundra -- we were doing pretty good up to that point.”