The world centre of racing closed its doors today after 6 days of stock car testing.

Testing earlier during Preseason Thunder were the stars of the NASCAR Sprint Cup Series and NASCAR Nationwide Series. Next up at the “World Center of Racing” will be the Rolex 24 At Daytona Weekend on Jan. 22-26. 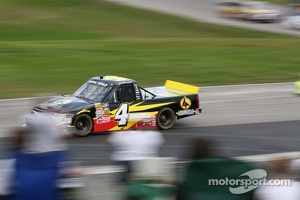 “There’s so much history behind Daytona and it would be really cool to get a trophy here,” Burton said. “It’s only my second time here. Last year we finished fifth and we always have a lot of speed at restrictor plate tracks so I’m excited for 2014.”

On Tuesday, showers delayed the start of testing until early afternoon and only a handful of teams remained to participate on the second day with Johnny Sauter being the fastest at 183.921 mph.

The two-day test was a moment that Kennedy had been dreaming about for many years. Entering his first full season in the NASCAR Camping World Truck Series driving for Turner Scott Motorsports, Kennedy is the son of ISC Chief Executive Officer Lesa France Kennedy and grandson to Bill France Jr.

He was practically raised at the “World Center of Racing” and turning his first laps around the 2.5-mile tri-oval put a big smile on the rookie driver’s face.

“The first two laps or so I was grinning from ear to ear,” Kennedy said. “It was really awesome to do that. From always being around this racetrack and always watching races here and working here and doing pretty much everything here, I was sort of born and raised here. Being able to go around the track was something special, and being able to race here on the same weekend as the Daytona 500 is something awesome.”

Kennedy is campaigning for top rookie honors in the NASCAR Camping World Truck Series after competing in the NASCAR K&N Pro Series East since 2010.

Kennedy began his racing career on the short tracks of Central Florida. He has Pro-Truck championship titles at both Orlando Speedworld and New Smyrna Speedway, which he earned in 2009, followed by the Super Late Model championship at Orlando Speedworld in 2010. While he has competed at Daytona on the backstretch in last year’s UNOH Battle At The Beach, he had never turned laps on the 2.5-mile tri-oval and had never participated in any kind of drafting sessions until this week.

NASCAR Next drivers top charts during Truck test at Daytona