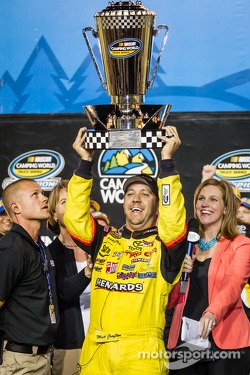 En route to his 2013 championship, Crafton won one race at Kansas and recorded seven top-five finishes and 19 top-10 results in 22 races. He began the year with a streak of 16 consecutive top-10 finishes, including top-five results at Martinsville (second-place), Charlotte (fourth), Dover (second), Texas (fourth) and Chicagoland (fourth). The Tulare, Calif.-native held the lead in the series standings since the fourth race of the year.

"It's an honor to be able to drive this Menards Toyota Tundra," says Crafton. "To be able to do this for Duke and Rhonda Thorson (team owners) that have been doing this for 18 years, and to give them their first championship and me driving for them for 14 years. For Menards and all the people that have been behind me, every one of these guys that work on this truck, it's an honor to be able to give them this championship. These guys are the ones that work so hard. I'm just the one that gets to celebrate and look like the hero because I got to drive a great truck all year."

The 37-year-old driver holds the record among active drivers for most consecutive series starts (316), dating back to his first series race in 2000.

"On behalf of all our associates at Toyota and TRD, I would like to congratulate Matt and the entire ThorSport Racing organization on their first NASCAR championship," said Les Unger, Toyota's national motorsports manager. "When ThorSport Racing began fielding Tundras last year for Matt and Johnny Sauter, their ultimate goal was winning a championship. Matt and the team accomplished that this year and he's the true embodiment of what the Truck Series is all about."

In 14 years competing in the NCWTS with ThorSport, Crafton has earned three victories, 63 top-five finishes, 175 top-10 results and seven pole positions. He finished as the series runner-up in 2009 and is the 2000 NASCAR Featherlite Southwest Tour Series champion.

In addition, this is the first NASCAR title for the Ohio-based ThorSport Racing team -- one of the longest-running teams in the NCWTS that has been competing full-time in the series since 1998. The team also won their first ARCA championship earlier this year with Camry driver Frank Kimmel.

This marks the fifth NASCAR driver's championship for Toyota since the manufacturer entered the sport in 2004 with the Tundra. In addition to Crafton's title, Todd Bodine is the 2006 and 2010 champion and Johnny Benson won the NCWTS crown in 2008, and Kyle Busch was the 2009 NASCAR Nationwide Series (NNS) champion.

In addition, Tundra driver Erik Jones made NASCAR history as the youngest driver (17 years old) to win a national touring event when he finished first at Phoenix, in only his fifth series start, and his Kyle Busch Motorsports teammate Darrell Wallace Jr. also made NASCAR history with his first career victory at Martinsville to become only the second African-American to win a NASCAR national touring series race.

With Rowdy behind the wheel there's always a chance