The primary sponsor of the No. 4 entry driven by Jeb Burton in the NASCAR Camping World Truck Series (NCWTS), has defaulted on payment to the team.

MOORESVILLE, N.C. - Turner Scott Motorsports (TSM) announced today that Arrowhead, the primary sponsor of the No. 4 entry driven by Jeb Burton in the NASCAR Camping World Truck Series (NCWTS), has defaulted on payment to the team. As a result of Arrowhead's unfortunate and untimely failure to make a critical payment, Turner Scott Motorsports will not be able to field Burton and the No. 4 truck full time for the 2014 season. 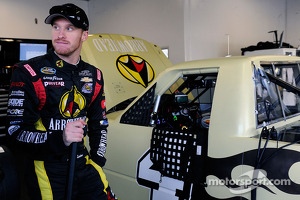 The loss of the primary sponsor also means that the company must begin making staff reductions. It is anticipated that the reductions will affect up to 20-percent of the current TSM workforce. The company is moving as quickly as possible to give the affected employees the maximum opportunity to seek employment with other teams.

"The breakout success of Jeb Burton and the entire No. 4 team in 2013 makes these decisions especially painful," said team co-owner Harry Scott Jr. "However, we will do everything we can to put Jeb on the racetrack with our organization going forward. He is a great talent and has a great career ahead of him. Despite this setback, Turner Scott Motorsports remains strong overall and will compete for championships in both the NASCAR Nationwide Series and the NASCAR Camping World Truck Series. We are extremely proud of the talent of our workforce here at TSM, and it is very difficult for us to lose anyone within our organization. We understand the way that this affects the lives of everyone involved, and we will do our best to assist in placement elsewhere in the sport."

"Obviously, these are tough circumstances for everyone involved, not just for me, but also for my teammates who are affected," said Burton. "I am working with Turner Scott Motorsports to identify any potential opportunities for me to get on the track this year."