The No. 3 Chevrolet team is tied for first in the Camping World Truck Series owner championship point standings, with the No. 22 team seventh in the standings and the No. 2 team ninth.

Dillon leads the Sunoco Rookie of the Year point standings ahead of Cale Gale.

Tim George Jr. and the No. 2 Applebee's/Potomac Family Dining Group team were relegated to a 21st-place finish in the VFW 200 at Michigan International Speedway after the No. 2 Chevrolet spun on the backstretch causing the pit crew to make an unscheduled pit stop under green-flag conditions. The New York City native started the 100-lap event from the seventh position and reported that he was battling a tight-handling condition on his Chevrolet Silverado, but was able to maintain a position within the top 20 during the first half of the 200-mile event. George worked his way into the top 15 and was running solid lap times when the Applebee's Chevrolet spun on the backstretch on lap 65 and cut a tire, forcing the team to make an unscheduled pit stop on lap 66 under green-flag conditions. George returned to the track in the 23rd position, two laps down to the leader. The Richard Childress Racing driver produced lap times as quick as the leader and gained track position, ultimately crossing the finish line in the 21st position.

TIM GEORGE JR. QUOTE: "That was not the finish I was looking for when we started the race today. Gere (Kennon, crew chief) and the entire Applebee's team put together a solid Chevrolet this weekend, but the truck turned on me and we lost the handling at the end and weren't able to regain much ground after the spin." 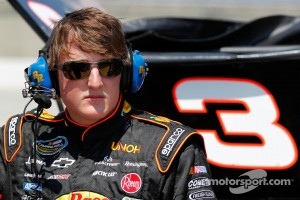 Ty Dillon and the No. 3 Bass Pro Shops team battled fuel mileage late in the VFW 200, finishing in the sixth position at Michigan International Speedway and gaining one position in the NASCAR Camping World Truck Series driver championship point standings to tie for the points lead. Dillon started the black and orange Chevrolet in the fifth position for the 100-lap event on Saturday afternoon. Shortly after the initial green flag, the 20-year-old driver used the draft to take over the second position on lap 17 but slipped back to seventh on lap 26 and remained a fixture in the top 10 for the majority of the race. As multiple trucks spun in front of the No. 3 Chevrolet on lap 45, Dillon slipped by with no damage to his truck and moved into the fifth position in the process. With multiple caution flags over the next 10 circuits at the Brooklyn, Mich.-based facility, the Welcome, N.C., native was able to save fuel, but not enough to make it to the finish. Dillon relinquished his third position on lap 84 when crew chief Marcus Richmond called the Bass Pro Shops Chevrolet to pit road for fuel and right-side tires. As green-flag pit stops cycled through, Dillon was scored in the 11th position with eight laps remaining in the 100-lap affair. He was able to improve five spots, to sixth, before the checkered flag waved, marking Dillon's 11th top-10 finish of the 2012 season.

TY DILLON QUOTE: "It was a great points day for the No. 3 Bass Pro Shops team. Marcus (Richmond, crew chief) and the guys were solid on pit road all day. I thought we could have won today, but the fuel mileage game didn't play out in our favor. We were good to the end, but some of the other teams took the gamble and it worked for them. I'm excited to ride this momentum into Bristol (Motor Speedway) on Wednesday."

Joey Coulter and the No. 22 Rip It Energy Fuel Chevrolet team earned a seventh-place finish at Michigan International Speedway after Coulter captured his career-first Camping World Truck Series pole award in the Saturday afternoon VFW 200. After the drop of the green flag, the No. 22 Chevrolet was shuffled back to the fifth position within the first lap of the 100-lap event and Coulter promptly radioed to crew chief Harold Holly that the Richard Childress Racing machine was tight in traffic. On the lap-13 caution, Holly instructed the 22-year-old driver to bring his Silverado in for a fuel-only pit stop. Restarting in the third position, the Miami Springs, Fla., native, was trapped in traffic as he reported that the No. 22 Chevrolet had acquired an extremely loose-handling condition, prompting the Holly-led crew to execute a wedge adjustment on the next pit stop to combat the ill-handling racer. Fuel mileage ultimately decided the result of the event, as the last round of pit stops occurred under green-flag conditions. With teams employing many strategies, the No. 22 team made its final pit stop on lap 84 with their RCR teammate, Ty Dillon. The two teammates drafted with each other for the remainder of the event, working their way towards the front, with Coulter ultimately taking the checkered flag in the seventh position. The 2011 Camping World Truck Series Rookie of the Year is currently seventh in the Camping World Truck Series driver championship point standings, 43 points behind the leaders.

JOEY COULTER QUOTE: "The racing was awesome all weekend in Michigan. I'm disappointed in the finish as Harold (Holly, crew chief) and all of the guys on the (No.) 22 team provided me with a truck capable of winning. We have a short week before we go racing at Bristol (Motor Speedway), and we will use the momentum from our win at Pocono (Raceway) and the pole award at Michigan (International Speedway) to be competitive for the win at Bristol."