The No. 13 can be lucky in "Sin City" if you are playing roulette and your chips are riding on the odd numbered black space down the middle of the board. However, Joey Coulter, driver of the No. 18 GunBroker.com Toyota Tundra had his chips on a different number for the 17th race on the 2013 NASCAR Camping World Truck Series (NCWTS) event. After starting 14th, 13 positions behind his 2012 start, Coulter ran as high as second and settled for an "unlucky" 13th-place finish in Saturday's Smith's 350 at Las Vegas (Nev.) Motor Speedway. The Kyle Busch Motorsports (KBM) driver remains 13th in the 2013 driver point standings. 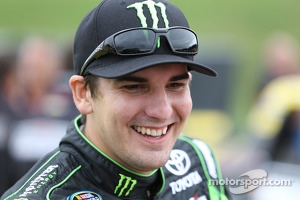 "Our GunBroker.com Toyota Tundra started out pretty good tonight," Coulter said. "We made a bunch of adjustments early on and had the truck running really good - got some good track position and ran up front for a while. I thought we were going to be in pretty good shape, but we kept chasing the race track a little bit. We made an adjustment that went the wrong way for us -making me pretty loose. We got it dialed back in a little too late though and did the best we could on that last restart. It was a decent night for this No. 18 team but it is kind of disappointing we aren't knocking off those top 5 and top 10 finishes like we need to. Talladega is our next race and anything can happen, but I like the superspeedways and feel confident we can regroup there."

Starting on the outside of row seven in the 14th position, Coulter maintained his spot in the opening laps, battling a GunBroker.com Tundra that was, "free on entry which was causing it to be tight center and off" until the first of nine caution flags was displayed for a spin in Turn 4 on lap 15. Coulter made his way down pit road for fuel only and would restart from the 10th position on lap 18 of 146.

Holding his ground inside the top-10 Coulter said his Toyota Tundra was, "better on entry but a little tight in the center of the corner and off." Therefore, when the second caution flag was displayed on lap 29 for the 22 truck in Turn 4, Coulter brought his GunBroker.com machine down pit road for four tires, fuel and a trackbar adjustment. Coulter would take the lap 32 restart from the 20th position.

As his Toyota Tundra started getting better on the long green-flag runs, crew chief Harold Holly noted that track position was key. Coulter would work his way up to the 16th position before a spin by the 99 truck in Turn 4 brought out the third caution on lap 48. Holly called for a chassis adjustment and fuel, sending Coulter out in the fourth position for the lap 51 restart.

Coulter ran as high as second over the next 24 circuits, but was scored fourth when the fifth caution flag was displayed on lap 75 for the 19 of Ross Chastain. Complaining that his GunBroker.com Tundra, "gets tight on the restart and then comes around a few laps later," the 18 KBM crew changed four tires and made a chassis adjustment when Coulter came down pit road under caution. The 23-year-old driver would take the lap 78 restart from the 16th position.

Unfortunately, Coulter fell to 19th on the restart battling a Tundra that was, "loose off, especially Turn 4" for the next 15 laps until a welcoming opportunity for relief was displayed on lap 93. Holly opted to bring Coulter down pit road for fuel and a chassis adjustment under the sixth caution and when racing resumed on lap 96 the GunBroker.com Tundra was seventh.

Coulter worked his way up to the fifth position by lap 98 but, on a lap 102 restart the Miami Springs, Fla. native got hung on the bottom, forcing the 18 machine three-wide and eventually Coulter was shuffled back to the 13th position, which is where he remained until the eighth caution flag was displayed on lap 110 for the No. 51 KBM machine.

Holly used the caution flags on laps 110 and 140, respectively, to get the, "loose on late exit," GunBroker.com Tundra dialed-in. Restarting 17th with two laps remaining in the 146-lap event, Coulter was able to muscle his way past four trucks to claim the 13th position as he crossed the line.

KBM teammate, Chad Hackenbracht, making his track debut at LVMS, recovered from a spin on lap 110 to finish 17th in 17th race on the 2013 NCWTS schedule.

The 29-truck field was slowed nine times for 36 laps and the lead was exchanged 13 times by nine different leaders.

The NCWTS will take two week's off before heading into the final five races of the season. Up next for the No. 18 Kyle Busch Motorsports team is Talladega (Ala.) Superspeedway for the Fred's 250 powered by Coca-Cola on Saturday, Oct. 19 at 4 p.m. ET on FOX Sports 1. Coulter has two previous starts at the 2.66-mile oval including one top-15 finish.

Bad luck in Las Vegas for Chastain and Blaney