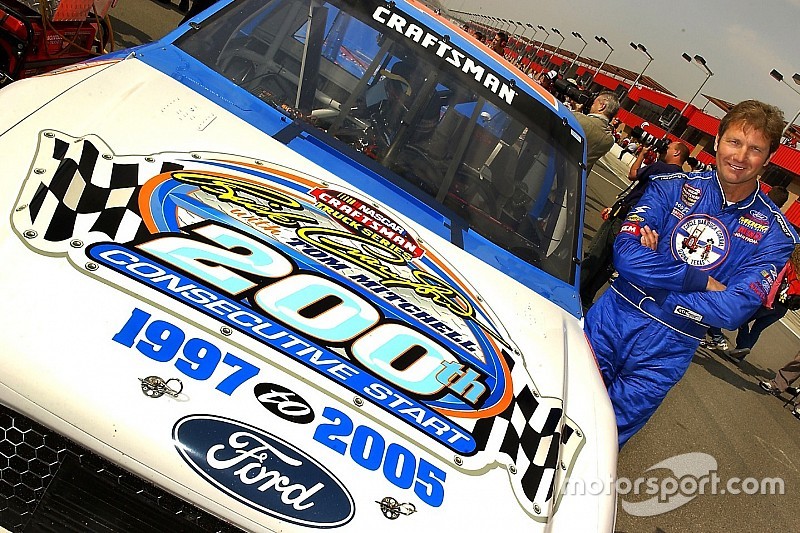 For Rick Crawford, longtime NASCAR fans can’t think of Ford and the NASCAR Camping World Truck Series without thinking of the Mobile, Ala., native.

Although Crawford didn’t compete in the inaugural season of what was then called the NASCAR Craftsman Truck Series, he started in 1997 and went on to compete in 336 races over the next 16 seasons. He always drove a Ford truck and became one of the most popular drivers in the series.

Motortsport.com recently caught up with Crawford after he returned from a visit to England with former fellow Truck series driver Mike Skinner.

“Yes, I had a good time with Mike over in England,” Crawford said. “Mike called me up and asked if I would like to go over and check things out at Goodwood and help out with their member races as part of the 75th anniversary there. It was a lot of fun.”

Crawford has also been working with young drivers over the past couple of seasons and worked with driver Derek Scott Jr. last season in Late Model Stock competition.

Crawford began his short track career competing at tracks like his home track at Mobile and Five Flags Speedway just across Mobile Bay in Pensacola, Fla., in the 1980’s. Crawford would go on to win track championships at Five Flags and Mobile and won the prestigious Snow Ball Derby in 1989.

He then moved on to the former NASCAR Touring Series called the All-Pro Series. It was during this time that Crawford formed a relationship with Tom Mitchell that would last over 20 years.

Crawford also ran with Hogan Racing in the 1990’s in All-Pro as well but it was his relationship with Mitchell that would prove to be the partnership that propelled Crawford’s career.

“We won big late model races at Martinsville Speedway and Bristol Motor Speedway and had some great success back then,” Crawford said. “We sat on the pole at the Milwaukee Mile and always had great horsepower with (Robert) Yates Engines.”

Time to move up

After the NASCAR Craftsman Truck Series was taking off and enjoying success after its first two seasons, Crawford and Mitchell decided to take the next step and move up to the series in 1997.

“At that time you have Jack Roush, Rick Hendrick, Richard Childress all involved in the series and Mr. Mitchell noticed that and he decided to by a truck and we made the move to the truck series,” Crawford said. “Mr. Mitchell went out and got a truck and 300-plus races later I’m able to talk about a great run we had together.”

Crawford qualified for every race during the 1997 season and finished second to the late Kenny Irwin Jr. for rookie of the year finishing 12th in the final standings.

He picked up his first win in the truck at Homestead-Miami Speedway in 1998 and enjoyed success over the next couple of seasons. He finished second in the points standings in 2002 finishing with 12 top-five and 17 top-10 finishes in 22 starts.

Crawford opened the 2003 season scoring the season-opening win at Daytona International Speedway in a thrilling three-wide finish with Robert Pressley and Travis Kvapil.

“That win was the highlight of my NASCAR career,” Crawford said. “I believe it was the first race on what was then the SPEED channel and that was a great finish and win for me and my team and Mr. Mitchell.”

Crawford won in the Circle Bar Motel and RV Park sponsored truck and enjoyed his time in the truck series.

“Wayne Auton and NASCAR ran a great series while I was there and I was fortunate to get to be with Circle Bar for 14 years,” he said. “Tom and Lisa Mitchell were so good to me along with Ford and sponsors and crew members.”

Loyal to the blue oval

Crawford ran a Ford truck in 327 of his 336 career starts and fans remember him almost as much as being loyal to Ford as his five career series wins.

“I ran Fords before I met Mr. Mitchell, but his blood was loyal to the Ford blue and that is what we ran together,” Crawford said. “Ford was real good to our race team and anything we needed – they would give us the shirt off of their back. I’ll always appreciate what Ford did to help our team and my career.”

Crawford especially remembers some special guests who stopped by their shop during his stint in the truck and left a special present.

“I’ll never forget the time Edsel and Bill Ford came by our shop one day,” Crawford. “It really meant a lot to the team that they would take time to come by and see us and they also gave us an image of Henry Ford that we proudly displayed.”

Crawford also added they helped Ford off the track as well.

“We got to be a part of helping design the 2004 Ford F-150 and also were a part of launching the 2009 Ford truck along with Toby Keith in Detroit and that was a special memory for me,” he said.

Giving back and giving thanks

During his time competing in the NASCAR truck series, Crawford got to be involved with several drivers in a tour of Europe to support the United States armed forces and troops serving.

“I was lucky enough to get to go overseas for four straight years and participate with other drivers and NASCAR officials in Iraq and Bosnia,” he said. “Going over there and trying to help the soldiers serving over there really puts things into perspective and it made me appreciate our freedom that we sometimes take for granted.”

Crawford added something that sticks with him today.

“Going on those trips made me remember what was important,” he added.

The present and the future

Crawford’s last full-time race season was in 2009 and after making 14 starts over the next three seasons.

“I was blessed to have a long career driving a race car or truck,” Crawford said. “I was fortunate to make some great friends along the way and a lot of great memories.”

In addition to participating in Goodwood with Skinner recently, Crawford has stayed busy in racing over the past couple of years.

In 2011, Crawford returned home to manage Mobile International Speedway and later in 2013, he moved to Kalispell, Mont., to manage the new Montana Raceway Park.

He’s also helped drivers in the NASCAR K&N Pro Series and also plans on staying active in helping drivers and race tracks when needed or asked.

“I feel like I still have something to give to the sport in either helping a young driver learn or helping promote racing at a race track,” Crawford said.

Crawford says to this day he still tries to meet with fans as much as possible and will always be grateful for their support.

“I hope the fans know I raced as hard as I could every time I was in a truck and worked hard to put on a good show for them,” Crawford said. “I was blessed to get to do what I did and that made me want to work even harder to be successful for the fans that supported us all those years.”

Crawford is happy he still gets a chance to be around race fans.

“I had a really good time in England with Mike (Skinner) and enjoyed meeting the fans over there last month,” he said. “I don’t know what the future holds for me and I just try to take it a day at a time, but I hope I get to stay in racing and interact with the fans for a long time.”