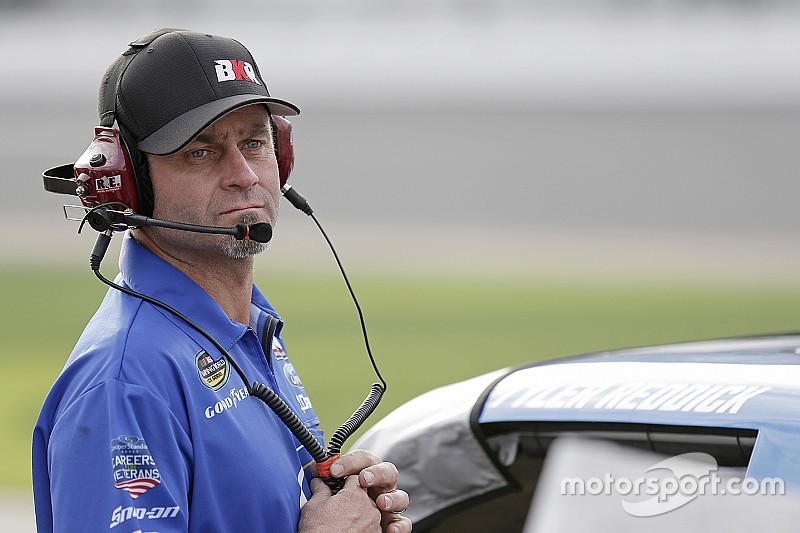 Not many drivers can say they helped bring in a first-time manufacturer into NASCAR, claim five NASCAR Touring Series championships and a two track championships at his home track - Hickory Motor Speedway.

But then again not many drivers are like Robert Huffman.

Motorsport.com recently caught up with Huffman, who now serves as truck chief at Brad Keselowski Racing for the No. 19 Draw-Tite Ford F-150 driven this year by Austin Cindric.

Huffman was like a lot of young race fans growing up in North Carolina. He and his family would often go to Hickory Motor Speedway to watch his dad JV race. Huffman caught the racing bug at a young age and it eventually worked out pretty well for native of Claremont, North Carolina.

When he was old enough, Huffman decided to get a race car and give it a try himself.

He got his start in the Limited Sportsman division and moved up to the Late Model Stock division winning back-to-back track championships in 1998-89.

“I had a good time racing at Hickory Motor Speedway with my friends and when I had the opportunity to move on to the NASCAR Goody’s Dash Series I decided to give it a try full-time in 1990,” Huffman said.

Huffman had watched his neighbor Ned Combs run a lot in the series formerly known as the NASCAR Goody’s Dash Series.

Huffman took advantage of the opportunity. He won four races, rookie-of-the-year and championship honors in his first season.

“We got off to a great start that season and things went well for us all year long,” Huffman said. “That was nice getting a championship that year.”

Moving on to other divisions

Huffman was like a lot of other young drivers looking for any opportunity to move up in the NASCAR world.

Following his championship season, Huffman moved on to the NASCAR Busch (now Xfinity) Series in 1991, with his family-owned team.

“We built a Busch car and tried to make it on our own with a handful of starts but we never had the resources to race full-time in the series,” said Huffman.

Back to his roots

Huffman returned to short track competition throughout the southeast in his Late Model car. He won at tracks in Tennessee, North Carolina and Virginia during over the next three seasons.

In 1996, he decided to return NASCAR Goody’s Dash Series full-time. Huffman built his own car and operated out of his family-owned shop in Claremont.To say it was a good decision, might be the understatement of his career.

Although he was competitive and won races, he didn’t get things rolling until the 1998 season.

“We kept working as a team and got to the point by the 1998 season we were ready to go after a title,” Huffman said. “We went on to win eight races that year and the championship. That was a good year.”

Huffman returned in 1999. He won seven races and his second title and in 2000, Huffman became the second driver in the history of the series to win three-straight crowns, visiting Victory Lane four times.

Huffman went on to win the 2003 Goody’s Dash championship scoring three wins during the season at Daytona, Charlotte and Kentucky Speedways.

With his fifth title, he joined Dean Combs as the only driver to win that many championships in the history of the series.

Huffman received support and engines from Toyota Research and Development in the early 2000’s with his Goody’s Dash Series team and that enabled him to the take the next step in his driving career.

His relationship with TRD opened another door when the manufacturer decided to make the move to NASCAR’s Truck Series.

“I was fortunate to have Toyota come on board with our Dash team when they did,” said Huffman. “They came on board and helped my team and also Eric Van Cleef’s team in the Dash Series. This whole deal started with a phone call and moved on from there.”

After Huffman’s success in the NASCAR Goody’s Series, he was the logical choice to move up to the truck series. His chance came in 2004.

“I was grateful for the opportunity David Wilson and everyone at Toyota gave me back then,” Huffman added. We had some good runs in those two seasons and I was fortunate to be in the truck series with Toyota when they started.”

Huffman ran a total of 40 truck races in his career. His best finish (6th) came at Richmond in 2004.

While his driving career might not have ended like he wanted, Huffman knew it was time for a change.

“I’m still great friends with David and a lot of people at TRD and I see them a lot at the track today,” Huffman said. “We had some great times and success in the race car, but I knew it was time for me to move on.”

“I can’t say that I regretted anything in my career,” said Huffman. “It was a good transition for me when I quit driving.”

Huffman evolved into a crew chief for several teams in the NASCAR Whelen All-American Series, Hooters Pro Cup Series and other series before his break came in the Camping World Truck Series.

“It was five years ago last weekend when Brad was talking to Dennis and he asked him if he knew anyone he could hire for his new truck team,” Huffman added. “Brad called me and we talked some but I didn’t go to work for him until the fall of that year.”

Huffman has been at Brad Keselowski Racing ever since and enjoys his new career working with the successful race team.

“I really enjoy working here knowing we have trucks that are capable of winning each week,” he said. “It’s also nice to watch the young drivers we have in the trucks develop and move on in NASCAR. It means a lot to me to be a part of this team.”

With his success in the NASCAR Goody’s Dash Series and his sponsor White House Apple Sauce, Huffman was always a fan favorite.

“That was one of the great things about that series,” he said. “We raced each other hard as competitors but it was really just one big family between the racers, crew members and fans. We had a lot of fans that would come to numerous races every year and that was special.”

Huffman remembers the fans that always were there for him no matter where he raced.

“I could race at Hickory or on the road at another track and the fans were always there and supportive,” Huffman said. “I’ll always remember those fans and some of them now support Landon when he races.”

Huffman recorded three wins at Daytona as well as wins at Charlotte.

“I’ll always remember those wins and the fans would often tell me that they saw me win either there or at Hickory or wherever and that always means a lot to me that the fans always supported me and my team.”

Huffman enjoys his job now at BKR. One of the perks of competing in the NASCAR Camping World Truck Series is the addition time he’s able to spend with his family – wife Ashley and daughter Brooke and son Landon.

“It’s nice to be able to race with the truck team and get back home to spend time going to Brooke’s dance recitals or Landon’s races,” Huffman said. “I’m really lucky and happy still be able to work in racing.”

As for what the future holds, Huffman doesn’t worry about that. He just wants to enjoy his life now with his wife Ashley and their children.

“We have built a new Late Model for Landon and we’re going to travel around some short tracks in the Carolinas and Virginia and try to run some Cars Tour events too,” he added. “I stay busy and that’s a good thing.”

What a difference a year makes for Christopher Bell