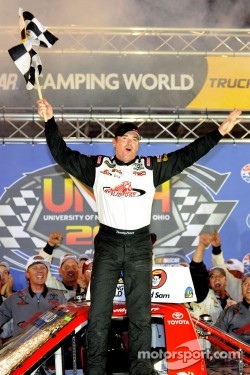 TIMOTHY PETERS, No. 17 Toyota Tundra, Red Horse Racing Finishing Position: 1st
Did you think you could win at Bristol and lead every lap coming into tonight's race? "I would've said absolutely I was going to lead every lap. Oh man, what an awesome feeling. First, I want to apologize to the guys at home for the burnout and hurting the truck. Thank you guys for an awesome Toyota Tundra. These guys right here worked their butts off like they do week in and week out. We had great speed the first practice and then we had a flat tire and it just screwed our whole strategy up and we kind of got off a little bit. Butch Hylton (crew chief) is so good about getting us all together and using it as an experience to calm us down and we kind of met in the middle on some of the changes and boy was she flawless tonight."

How many wins do you think you can get this season? "I just thank the good Lord for being with me and letting me win two in one year. We're working really hard -- Joe Gibbs (Racing) engines and everybody at the shop. Who knows -- the sky is the limit right now. Happy Birthday to Tom DeLoach (team owner). He gave me an awesome opportunity back in 2009 and the sky has been the limit ever since. I've got my mom here with me tonight and it's just a good time."

When did you know your truck was this fast? "When we qualified. First practice we had a lot of speed and then we had a left-rear (tire) go flat on us and that kind of messed up our tuning session a little bit. Butch Hylton (crew chief) is really good about pulling us together and kind of calming us down. He's like, 'Look, we don't have a bad truck, let's go off the way we finished the one practice and we kind of met in the middle with some changes and that thing was bad to the bone from the first lap."

How do you use this momentum from last year and this year moving forward? "I look at last year, towards the end of the summer stretch we started coming into our own. By the time we felt like the notebook was getting pretty good, it was Homestead. Butch (Hylton, crew chief) and I were on the same page, we were communicating very well, he got me on the stage at Miami and it just set the tone for the off-season. That show on Speed, 'Chop, Cut, Rebuild,' -- we were chopping, cutting and rebuilding for the better. At the same time too, these guys are going the extra mile to give me winning Tundras week in and week out. I wanted to improve myself. I started hitting the gym really hard, concentrating on my fitness. I'm always at the race shop because I love seeing how the trucks are put together from the front bumper to the back bumper. I watched more film this year than I ever have in my career. I had the mindset before, but I'm more determined. I want to make sure that I do the right things. Want to get my life better, not that it was bad, but I want to get it a little bit better. Everything is working out good. I want to ride this momentum as much as we can. Things are just going so good, it's hard to pinpoint one thing. It's no 'I' in teamwork right now."

BUTCH HYLTON, crew chief, No. 17 Toyota Tundra, Red Horse Racing
How were you able to recover from the cut tire in practice? "We had this happen to us at Chicago and I think at Iowa too we had a problem with a tire. The way the rules are, you only have so many to work with so you have 40 laps on a set practicing and you can't just throw a sticker on there. They'll give you another new one, but only one. We had to kind of stop for a minute and think about it. Once we were able to do that, the guys did a great job of getting our truck turned around and ready to go. Timothy (Peters) drove his guts out tonight. The restarts were flawless. I know how hard he's worked on that this year. I just feel blessed to have a race like that -- it's so rare to do this. It's pretty cool."

TOM DELOACH, team owner, Red Horse Racing
How does it feel to finish first and second tonight? "It's very sweet tonight -- again, I am an incredibly blessed man. I'm blessed with a lot of people around me that are really good at doing their jobs. My only job is to kind of give them the playing surface so they can do it and boy, did they ever do it tonight. Timothy (Peters) did a great job driving, Butch (Hylton, No. 17 crew chief) did an incredible job setting up the truck and Chad (Kendrick, No. 7 crew chief) did an incredible job setting up with Parker (Kligerman) and he finished second. He clawed his way up through the pack. Todd (Bodine) was going to be in the top-five too had he not cut down a tire on a skirmish with another driver. It was really looking like this was going to be even more incredible than it is. I really think Todd would have been here. As you look at it, one and two on your birthday is pretty doggone sweet."

PARKER KLIGERMAN, No. 7 Toyota Tundra, Red Horse Racing Finishing Position: 2nd
How challenging was it to get track position? "We did everything we could to get rid of track position there at the beginning -- or at least I did. I stalled it coming out of pit road and we had driven all the way up to fifth or fourth there on that first run. We had a great stop and I messed up. None of these guys quit here on this No. 7 Red Horse team. This truck got finished Tuesday night or Monday night at 10:30 at night. These guys have worked all of the last three weeks to get these things here. I'm just proud of them and proud to get a one-two (finish) for Tom DeLoach (team owner) on his birthday. Man, I wish I had a better restart there. I think we would look better up there in victory lane."

What happened on the final restart? "I wanted to get a good restart there and I got a good jump, but then he (Timothy Peters) kind of checked up and he was just playing the game, which is totally allowed. I had to check back up when he did that and he had a run and he was gone. It was my bad for getting a bad restart. I consider myself a lot better restarter than that. I'll beat myself up for the rest of the week. Congratulations to Timothy. They've helped us so much. The funniest thing is this is the oldest truck Red Horse has - - this truck that we ran -- and we knew this was going to be a tough race for us because it was going to be the truck that we weren't sure about. To come out of here second and almost win, I'm really excited for Atlanta."

How have you been able to be so successful with a new team? "I attribute it to Red Horse Racing. The entire organization is one whole team -- we don't say there's three teams there -- it's one team. Tom DeLoach (team owner) promised me that I'd have the best equipment they could put together and it showed at Michigan, it showed here tonight and even this being one of our trucks that will become a trailer queen as we say -- a backup truck after this, we knew this was going to be our toughest race and to come out of here and finish second -- that's big. I just attribute it to that whole organization working so well together. At the same time, we also have a ton of support from Toyota, TRD (Toyota Racing Development) and all those resources and all that data makes it so easy for Chad Kendrick (crew chief) and I to gel so quickly. I think at the same time I have a nickname for him, which is 'Hollywood' and I think we get along very well because we're very similar."

ROSS CHASTAIN, No. 08 Melon 1 Toyota Tundra, Green Light Racing Finishing Position: 3rd
How does it feel to get your career-best finish? "That was awesome -- this is Bristol baby and they knew we were here. They saw the watermelon truck. Couldn't pick any better people to get to finish behind the Red Horse guys -- they've got an awesome team and an awesome program. Our SS Greenlight Melon 1 Toyota Tundra was here. Can't say enough for Melon 1 and all the truckers out there hauling watermelons across the country with 15 million watermelons annually going out to customers and consumers. We're here in Bristol and we came out with third-place -- I can't believe it."

Are you excited for your third-place finish? "Oh yeah. Bryan Berry (crew chief) gave me an awesome truck and it took me about 120 laps to figure out how I needed to run it and to move up to the lanes I needed to. I had some luck on some of the restarts and getting to start on the outside. I took full advantage of every opportunity that was given to our team. Had a couple of incidents that definitely wasn't on purpose. Can't say enough for the whole SS Green Light team and Melon 1 for sticking behind me. It's been tough and had some tough races this year for sure. The whole Watermelon industry is behind me and we're looking to run the whole year. Still looking for more sponsorship and need some more, but this is the way we should run in the top-10. We came here expecting to run like this and had some lap times there towards the end that was comparable to Timmy (Peters). Can't say enough for Red Horse. They had some fast trucks this weekend. Can't say enough for this whole Watermelon Toyota."

TODD BODINE, No. 11 Toyota Care Tundra, Red Horse Racing Finishing Position: 31st
What happened that took you out of the race? "Pretty much the same thing that's happened all year. Cale (Gale) just pushed and got into the left-rear (tire) and cut the left- rear down. This Racing is so close and so competitive -- the kids without experience don't know that there's a lot of times that you have to let off. You have to say it wasn't the time to pass and let off the gas and not wreck. That's two weeks in a row that's happened because of young kids. I've got nothing against him -- Cale's a great kid and he's a great race car driver. Sometimes you have to let off."