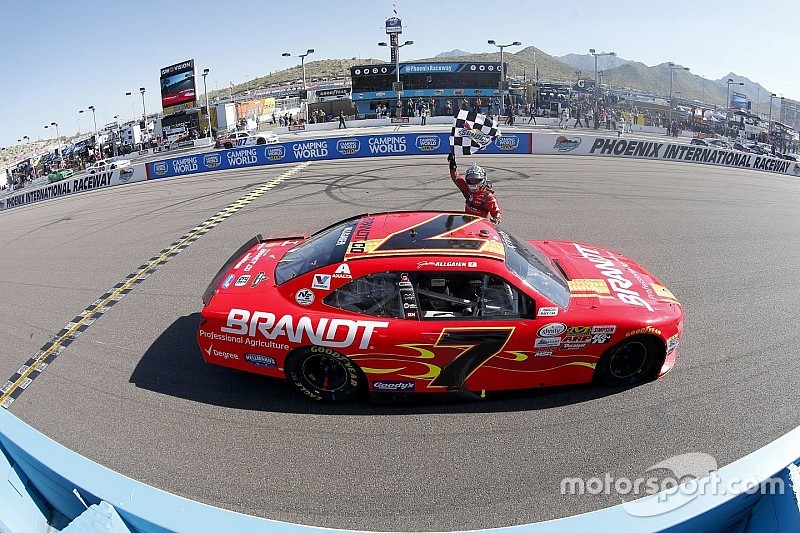 This one has been a long time coming for Justin Allgaier.

Allgaier held off Ryan Blaney in a four-lap shootout to win Saturday’s DC Solar 200 at Phoenix International Raceway and snap his 80-race winless streak in the NASCAR Xfinity Series.

Allgaier won the season’s first $100,000 Dash4Cash bonus. He, Elliott Sadler, Tyler Reddick and William Byron had qualified for the bonus earlier in the race.

The win is Allgaier’s first since 2012 in Montreal and fourth of his career.

“Last year was tough. We had really good runs all year but we weren’t able to get to Victory Lane,” Allgaier said after the race. “This was the same group of guys we had last year and to be able to do it here in Phoenix and win the first Xfinity Dash4Cash race – huge ‘thank you’ to them for that they do for our sport.

“This is a team effort. We had four really good JR Motorsports hot rods out there. How is it to be able to celebrate here in Victory Lane in Phoenix?”

The first person to meet Allgaier in Victory Lane was JRM team co-owner Dale Earnhardt Jr. and later by teammates Sadler and Byron.

While making a move to go three-wide, Cole Custer got into Austin Dillon on Lap 190 of 200 and knocked Dillon into the wall. The incident also collected Ryan Sieg.

Dillon, unhappy with the wreck, slowed on the track the following lap and waited for Custer to come back around and rammed his car into the wall.

“He over-drove the corner and took us out with it,” Dillon said of the incident with Custer.

NASCAR immediately called Austin, his crew chief and spotter to the hauler after the race. “We’ll probably just have a Coke and discuss things,” Dillon said of the meeting.

The race went back to green with four laps remaining and Allgaier quickly ran out to a comfortable lead over Blaney, which he was able to maintain until the finish.

“I knew we were going to have to be good on the short run,” Allgaier said. “I was really disappointed at the end of the first stage. We had a better car than where we finished in that first stage.

“These guys didn’t give up. The pit crew did awesome. I knew it was going to come down to a short run at the end and I knew we had the car and we just needed a good restart. We got it.”

Blaney held off Allgaier to win the second, 60-lap segment and capture the stage victory.

As the top two Xfinity Series regulars in the stage, Allgaier and Tyler Reddick became the final two of the four drivers eligible for the Dash4Cash bonus awarded in Stage 3.

On Lap 84, Matt Tifft got loose while running side-by-side with Brendan Gaughan, got into Gaughan and spun him around. Both appeared to receive minimal damage to their cars.

Jones dominated much of the first 60-lap segment and easily held off Austin Dillon to capture the stage victory.

“We’ll see if we can get this thing to run some faster lap times a little bit longer,” Jones said to MRN Radio during the stage break.

As the top two Xfinity Series regulars in the stage, Byron and Sadler became two of the four drivers eligible for the Dash4Cash bonus awarded in Stage 3.

Sadler made a pass of JR Motorsports teammate Allgaier with one lap remaining in the stage to take the second Dash4Cash position.

Early in the race, Jeremy Clements made contact with Daniel Suarez, which left Suarez with a tire-rub. Eventually, the tire blew, and Suarez wrecked hard in Turn 1 on Lap 12.

Dash4Cash bonus up for grabs in Xfinity race at Phoenix