Allgaier has something they all want

The prognosticators can predict who they think might win Saturday's Zippo 200 (2 p.m. ET, ABC) at Watkins Glen all they want, but the truth of the matter is that no one knows.

That's because no driver currently entered in the race has ever won a NASCAR Nationwide Series event at The Glen.

Furthermore, only one driver currently ranked in the top 10 in the standings has ever won a series event on a road course. That driver is Justin Allgaier, who bested the field last August at Circuit Gilles Villeneuve in Montreal to narrowly beat Sam Hornish Jr. to the finish line.

A win at The Glen would cap off a life-changing week for Allgaier, who Thursday morning announced on Twitter that his wife Ashley had given birth to their daughter, Harper Grace. The baby girl is the couple's first child. 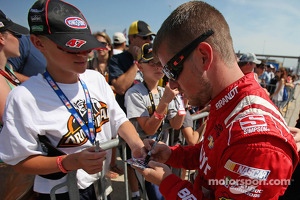 It's a quick turn-around from new-father to championship contender. In two short days, Allgaier goes from the hospital to the race track, attempting to nab a second road-course victory.

That one road-course win (and a string of five top-10 road-course finishes) might work in Allgaier's favor this weekend, although, he hasn't had a great deal of luck in his four starts at The Glen.

"I don't have the best results at Watkins Glen, but my team at Turner Scott Motorsports has prepared a great chassis, and I think we have a great chance to win," Allgaier said.

He has placed in the top 10 in each of the last five road-course races with an average finish of 6.0 in those events.

If Allgaier is able to continue his recent road-course success through the next two races – the NASCAR Nationwide Series makes its inaugural visit to Mid-Ohio Sports Car Course next Saturday – there is no reason to doubt that he'd be right in the middle of the championship conversation.

The Riverton, Ill., native is currently seventh in the standings, 50 markers behind points leader Austin Dillon. In 20 races this season, Allgaier has three top-five and 10 top-10 finishes, and has been running at the finish of every race. Earlier this season, he had a stretch of 11 consecutive races (Talladega through Chicagoland) where he finished in the top 15.

In 19 NASCAR Nationwide Series races in Watkins Glen, N.Y., 11 different drivers have made celebratory visits to Victory Lane. This Saturday a 12th driver will be added to that list.

Smith returns home in hopes of regaining the lead