Allgaier has made three previous starts at the fast, 1.54-mile Atlanta Motor Speedway. In those starts, he owns one top-10 finish with two laps led. Allgaier has an average starting position of 22.3, with an average finish of 12.0. 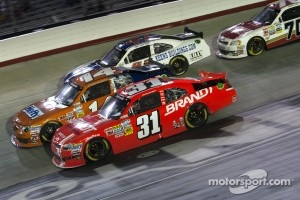 In the past 10 races at 1.5-mile, or intermediate, tracks, Allgaier is ranked third among his NNS peers in points scored with 353. The Illinois-native boasts two top-fives, six top-10s and six laps led, as well as an average start of 12.6 and average finish of 9.0 in those 10 races.

This weekend, Allgaier will drive TMS-327 in the NRA American Warrior 300 at Atlanta Motor Speedway. This car was previously raced at Kentucky Speedway and Charlotte Motor Speedway, where Allgaier finished fifth and eighth, respectively.

Allgaier on returning to the fast Atlanta track: "This BRANDT team is anxious to put last weekend in the rearview mirror and focus on what we need to do this weekend in Atlanta. This track is just so fast and we can carry speeds of over 200 miles per hour into the corners. I love it.

Atlanta is such a fun place to race and we get to do it at night again which as I've said before, I really enjoy. The opportunity to race in Atlanta is a great way to kick off the Labor Day weekend and I can't wait to get back on track and get the ship righted as we attempt to make up ground in the championship hunt."

Kahne has proved impressive at AMS

Buescher's first race in a Nationwide car at AMS