Amber Cope, who until yesterday may have been better known for her racy Maxim spread with her sister Angela than as a race car driver, is firing back at NASCAR driver Kevin Harvick.

Harvick blasted Cope in the media – after waiting on track to cut her off as they entered pit lane after the race – saying that she was “wants to be Danica Patrick, but she can’t hold her helmet”. 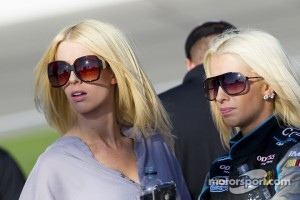 Despite the obvious similarities in how they raised their popularity, Cope has not yet accomplished what Patrick has achieved in her racing career – although Cope is not taking Harvick’s criticisms lightly.

Cope fired back on her Twitter account today, posting a picture that showed another car in the upper groove of the track as Harvick came up behind Cope in his unsuccessful attempt to pass Brad Keselowski for the race lead.

"Just bc u say it does not make it right!!!" Cope tweeted from the @AmberAngelaCope account she holds with her sister. "Mr @kevinharvick...where should I go? I will take the apologies Monday! ASS!"

Cope continued later, "I guess he forgot his journey", "I know I can hold a helmet." And "Way to go tough guy, I bet if u take a moment in your arrogance u will realize your fault @keselowski figured it out.”