Annett could be surprise factor at Road America

CONCORD, N.C. - For the first time this season, the drivers of the NASCAR Nationwide Series (NNS) will try their hand at a road course. The Flying J Travel Plaza team will head to Road America looking to turn heads. 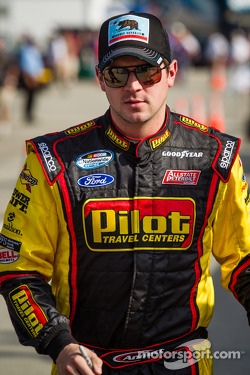 Annett may not be known for his road course success, but he has proved to his Crew Chief, Philippe Lopez, and the No. 43 team that he has what it takes to be there at the end.

Annett has three starts at the four-mile track, accumulating one top-10 finish. He earned his best starting position of 12th last year and his best finish of seventh in 2011. The No. 43 team was on their way to another top-10 finish last year until the transmission broke with two laps to go.

Annett will be participating in the NNS autograph session at Road America located in front of the Media Center entrance from 3:45 - 4:30 p.m. CT.

The session will be open to fans on a first come, first serve basis, and fans can begin lining up in front of the Media Center at 3 p.m. CT.

The Des Moines, Iowa native is hoping to celebrate his 27th birthday on Sunday, June 23rd with his first NNS win on Saturday night.

Comments from the No. 43 Flying J Travel Plaza Ford Mustang driver Michael Annett: "Ford sent all of the Ford drivers out to Miller Motorsports Park a few weeks ago, and we got to go out there in some Mustangs and work with Billy Johnson. He ran in Montreal last year with Roush and almost won. Jack Roush Jr. was out there helping us too.

"I finished seventh there in 2011 and was running around seventh last year when my transmission went out, so I think we have a really good shot at a good finish. My strategy every time we go there is to stay on the track and the last 10 or 15 laps get as much as I can and get a top-five or top-10 out of it."

Comments from Crew Chief Philippe Lopez on Road America: "I am expecting no less than a top-10. Michael is not known for his road course prowess, however, when we showed up last year, he ran in the top-10. We had a little off-beat strategy, but it seemed to work.

He was doing a great job, but, unfortunately, the transmission broke with two laps to go, I believe he was running seventh at the time. Michael does a really good job at Road America; it seems to suit him well.

"The biggest problem that Road America poses is that it's so big or so long that once you pass pit road it's a long time to come back. It really puts the pressure on the engineer to get the gas mileage right. If you figure out gas mileage wrong, you won't make it back to pit road, and that will end your day.

The other problem with Road America, although we might not face it this year because it seems like they've had a lot of rain, is when the ground is dry everybody has a problem with grass collecting on their grills. It takes two minutes to get around the track so if you start overheating you could cook your motor by the time you get back to pit road.

You really have to think through when you're going to pit, and if your mileage says you can go .9 of a lap, you might not take that lap because if you don't make it back, that's the end of your race.

"We took a chance in Michigan last week because of the threat of rain. This weekend we also have a threat of rain so I'm not sure how it's going to play out, but if a window of opportunity opens up, we're going to take it."

The No. 60 Roush Fenway Racing team battles to 17th