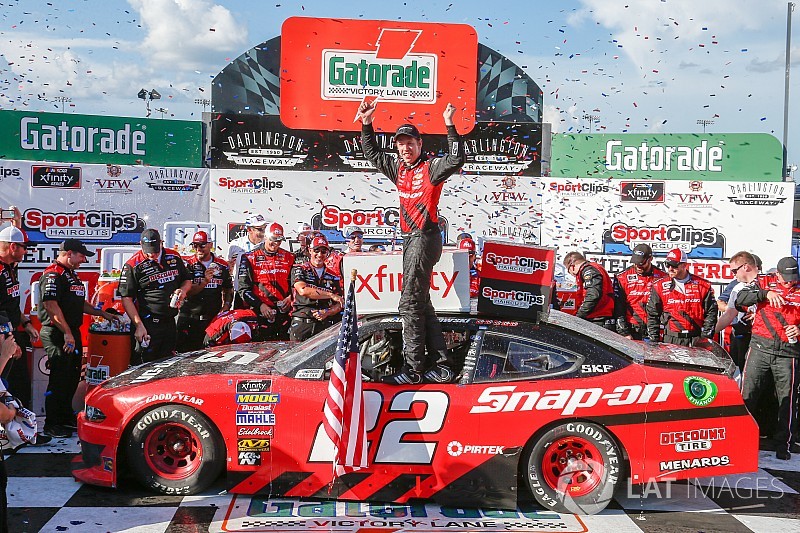 Brad Keselowski turned out to be in the right place at the right time.

When Ross Chastain and Kevin Harvick wrecked racing for the lead late in the race, Keselowski moved into the lead and never let it go.

"We had a really great Ford Mustang today," Keselowski said. "I could keep up with Ross (Chastain) but I couldn't pass him, he was so fast. They (Chastain and Harvick) has their thing off (Turn) 2 and we were able to pounce on it. That's a testament to this team. I ran five races (this season) and we won three of them.

"I really wanted to run this race because I've never won here. Great car. We've had a lot of fun this year. I'm so proud to be a part of this team.

The win is his third of the season, 39th of his career and first at the “Track Too Tough To Tame.”

On Lap 112 of 147, Chastain and Harvick were racing for the lead when the two made contact and it appeared Harvick pinched Chastain up into the wall. Chastain came back down, hit Harvick and sent him for a spin.

Keselowski moved into the lead while Chastain and Harvick were going at it.

“He pinched me on the door and I got loose. Then he wrecked me on purpose,” Harvick said over his radio. “Perfect way for that jackass to end his day. Wouldn’t be surprised if he didn’t get other opportunities because of stupid (expletive) like that. Jackass.”

In frustration, Harvick briefly parked his No. 98 Ford in Chastain’s pit stall before moving his car.

On the restart with 31 laps remaining, Keselowski led the way followed by Custer and Hamlin. Chastain restarted in 22nd following repairs.

One lap later, Chastain brought the No. 42 Chevrolet back down pit road for additional repairs.

With 20 laps remaining, Keselowski held a small lead over Custer, followed by Hamlin, Reddick and Sadler.

After reclaiming the lead late in the stage, Chastain held off Keselowski to earn his second consecutive stage victory.

Following the break between Stages 1 and 2, Chastain was the first off pit road as all of the lead-lap cars pit for fuel and tires. He led the way when Stage 2 went green on Lap 53. He was followed by Harvick and Daniel Hemric.

During pit stops, Denny Hamlin was penalized for removing equipment from his pit stall and Sadler had to restart from the rear of the field for an uncontrolled tire penalty.

Harvick bolted to the lead on the restart and shortly afterwards, Christopher Bell was forced to pit under green with a tire rub after contact with Hemric.

After the stop, Bell dropped to 28th in the running order and a lap down.

With 25 laps to go in Stage 2, Harvick held a small lead over Chastain with Keselowski having moved into third.

On Lap 67, Bell hit the wall in Turn 3 to bring out a caution. Bell drove his No. 20 Toyota to the garage and was done for the day.

“I just got loose off (Turn) 4, it’s pretty narrow down there,” Bell said. “Didn’t have time to correct before going down the straightaway. Just bummed for my team.”

Harvick continued to lead on the restart on Lap 71 followed by Chastain and Reddick.

Chastain quickly got around Harvick on the restart and moved back into the lead.

With 15 laps left in the stage, Chastain held a small advantage over Harvick as Keselowski continued in third.

On Lap 78, Brandon Jones spun off Turn 2 to bring out a caution. On the restart with nine laps left in the stage, Chastain remained the leader followed by Harvick and Keselowski.

Chastain led every lap and held off Bell to take the Stage 1 victory, the first stage win of his career.

“Just trying to do my job in here, take what the car will give me,” Chastain said during the break. “I’m struggling on (corner) entry. Something I’ve always struggled with.”

On Lap 2, Ryan Truex got into Austin Cindric coming off Turn 4 and sent Cindric’s No. 60 Ford careening into the infield wall, completing destroying the car.

“I could almost cry,” Cindric said. “This team has worked so hard and not to be able to experience this race, and my last race with this team, really bothers me.”

On the restart on Lap 10, Chastain led the way followed by Bell and Hemric.

With 25 laps left in the first stage, Chastain held a small lead over Bell while Reddick moved into third and Hemric dropped to fourth.

Chastain continued to hold a small advantage over Bell with 15 laps remaining in the first stage as Reddick remained in third and Harvick moved into fourth.

Three drivers – Vinnie Miller (moving to a backup car), Josh Bilicki (unapproved adjustments) and Chase Elliott (changing tires) – had to move to the rear of the field before the start.

In addition, Jones had to serve a pass-through penalty down pit road after taking the green flag because his No. 19 Toyota failed pre-qualifying inspection four times Saturday morning.

Chastain: "I’ll never forget the peaks and valleys of this weekend"