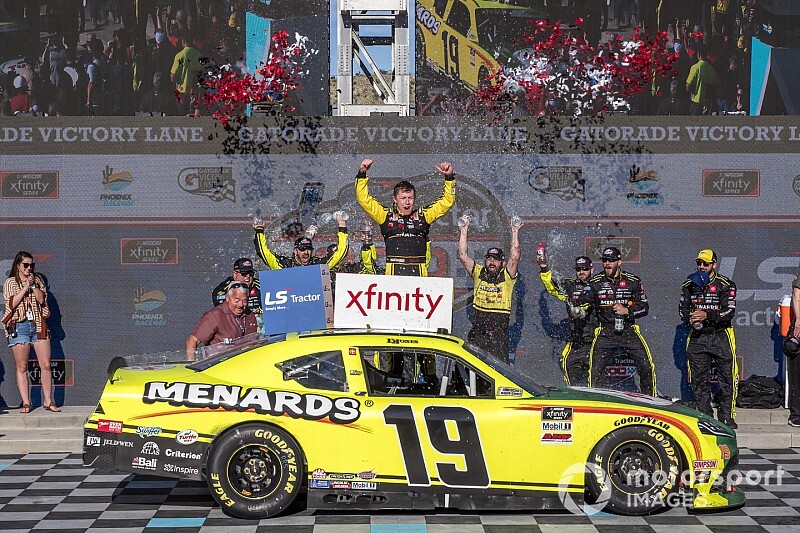 Another Xfinity Series win at Phoenix Raceway for Joe Gibbs Racing, but this time it was not Kyle Busch.

Brandon Jones passed Busch with 20 of 200 laps remaining and held off his other JGR teammate, Harrison Burton, to win Saturday’s LS Tractor 200.

The race was the first this season in the series for Busch, who owns 11 victories at the track.

“I could not believe (Busch) left the bottom (lane) open. We were so strong on that top lane,” said Jones, whose victory is the 500th in NASCAR’s three national series for Toyota Racing. “Toyota is the manufacturer to be with – I love them so much.

“We work hard and we’re going to get good results this year because of it.”

“I don’t know, we missed the set-up.” Busch said after the race.

On Lap 128, Joe Nemechek hit the wall in Turn 3 to bring out a caution. Most of the lead-lap cars elected to pit with Gragson the first off pit road. Justin Allgaier did not pit and led the way on the restart on Lap 134.

Brandon Brown made contact with Dillon Bassett on Lap 137 and spun out to bring out a caution. After the race, Bassett got into a physical confrontation with members of Brown’s crew.

Allgaier used the caution to give up the lead and add fuel. On the restart on Lap 143, Jones led the way followed by Busch and Gragson.

Busch powered into the lead on the restart just before Daniel Hemric got into Keselowski, which triggered a multi-car wreck and another caution.

The race returned to green on Lap 154 with Busch leading the way followed by Jones and Gragson.

With 25 laps to go, Busch remained out front but was closely followed by his teammates Jones and Burton.

With 20 laps remaining in the race, Jones went to the inside of Busch and emerged with the lead. With 10 laps left, Jones had opened up a 2-second lead over Burton as Busch dropped to third.

With the advantage of four new tires, Gragson ran down Chastain on a restart with two laps to go to claim the Stage 2 victory, the second stage win of his career.

Briscoe was third, Busch fourth and Allgaier completed the top-five.

Following the break between Stages 1 and 2, most of the lead-lap cars pit with Allgaier the first off pit road. Keselowski stayed out and inherited the lead when the race returned to green on Lap 56.

Allgaier battled Chastain for the lead after the restart and quickly moved back into the lead.

On Lap 64, Busch had battled back to the second spot and set his sights on Allgaier for the lead. Busch finally got around Allgaier to retake the lead on Lap 70. However, Allgaier managed to get back around Busch for the top spot on the following lap.

After regrouping, Busch once again got the momentum to retake the lead from Allgaier on Lap 77.

With six laps remaining in the stage, Colby Howard hit the wall hard off Turn 2 to bring out a caution. Most of lead-lap cars elected to pit with Gragson the first off pit road. Chastain remained on the track and led the way on the restart on Lap 88.

Allgaier grabbed the lead late in the stage and held on for the stage victory over Chastain.

Briscoe was third, Busch fourth and Cindric completed the top-five.

Busch started on the pole but Cindric got around him to take the lead shortly after the green flag.

On Lap 10, Busch was able to run down Cindric and retake the lead.

With 25 laps remaining in the first stage, Busch held a small but steady lead over Cindric as Chastain ran third.

On Lap 31, Ray Black II wrecked in Turn 2 to bring out the first caution of the race. On the restart on Lap 37, Busch continued to lead followed by Chastain and Allgaier.

With five laps to go, Allgaier powered around Busch to take the lead for the first time as Chastain move into second.

Black started the race from the rear of the field because of unapproved adjustments to his car following qualifying.