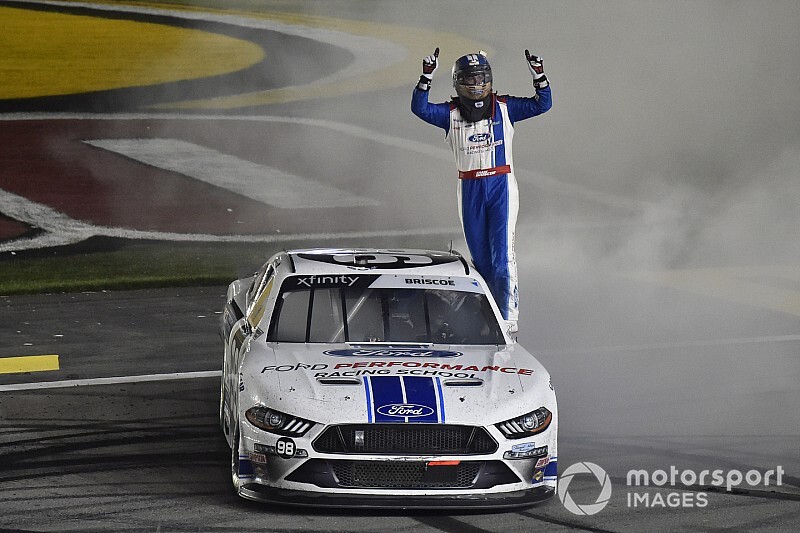 Chase Briscoe said he needed to win “eight to 10 races” this season to contend for the NASCAR Xfinity Series championship wasted no time in picking up his first.

Briscoe dominated much of Sunday’s race, the final 150 laps of which was postponed from Saturday. He easily held off Austin Cindric for the victory in the Boyd Gaming 300 at Las Vegas Motor Speedway.

The win is the third of Briscoe’s career.

Following the break between Stages 2 and 3, all of the lead-lap cars elected to pit with Justin Allgaier the first off pit road. On the restart on Lap 96, Allgaier was followed by Michael Annett and Ross Chastain.

With 80 of 200 laps remaining, Cindric had closed in on Allgaier to battle for the lead as Sieg moved up to third.

On Lap 124, Cindric finally got around Allgaier to move into the lead for the first time.

On Lap 144, Briscoe, who had been charging back to the front, passed Cindric to retake the lead just as a round of green-flag pit stops began.

Once the cycle of stops was completed on Lap 148, Cindric remained the leader followed by Sieg and Briscoe.

Both Justin Haley and Chastain were penalized for speeding on pit road during their respective green-flag stops and had to serve drive-thru penalties on pit road.’

On Lap 163, Gragson got into the back of Myatt Snider, which sent him spinning through the infield grass on the frontstretch and brought out a caution.

The leaders elected to pit during the caution with Briscoe the first off pit road. On the restart on Lap 170, Briscoe was followed by Cindric and Sieg.

Allgaier easily held off Cindric to take the Stage 2 win.

The first 50 laps were completed on Saturday before persistent rain showers postponed the remainder of the race until Sunday.

Once the caution was displayed on Sunday, there were 40 laps remaining in the second stage. A few cars elected to pit but when the race resumed under green on Lap 55, Briscoe – who won Stage 1 – led the way followed by Cindric and Chastain.

With 20 laps remaining in the stage, Briscoe maintained a 1.8-second lead over Cindric as Allgaier had moved up to third.

On Lap 71, Alex Labbe spun off Turn 2 to bring out a caution. Most of the lead-lap cars remained on the track and Briscoe continued to lead the way on the restart on Lap 77.

Allgaier quickly powered to the lead on the restart as Cindric moved to second and Briscoe dropped to third.

With five laps remaining in the stage, Allgaier continued to lead followed by Cindric and Briscoe.